The Pony Rider Boys in New Mexico Or, the End of the Silver Trail 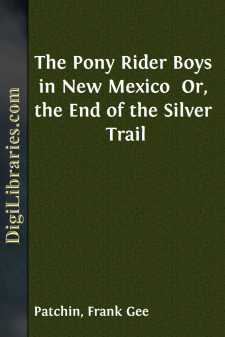 Three of the ponies, they found, had been knocked down and so severely shocked that they were only just beginning to regain consciousness.

"Why didn't you tell us?" demanded Ned, turning on Stacy savagely.

"You wouldn't let me. Maybe next time I've got an idea, you'll stop and listen."

"Master Stacy is right. He tried hard enough to tell us," he said.

Chunky was humming blithely as the party set out next morning. He was pretty well satisfied with himself, for had he not been through a prairie fire, knocked a savage Apache off his horse, saved himself and his companions, besides having just escaped from being struck by lightning? Stacy swelled out his chest and held his chin a little bit higher than usual.

"Chunky's got a swelled head," said Ned, nodding in the direction of the fat boy.

"Swelled chest, you mean," laughed Walter. "Nobody has a better right. Chunky isn't half as big a fool as he'd have everybody believe. When we think we are having lots of fun with him he's really having sport with us. And those Indians— say, Ned, do you think they will bother us any more?"

"Ask Chunky," retorted Ned. "He's the oracle of the party."

"I will," answered Walter, motioning for Stacy to join them, which the latter did leisurely. "We want to know if you think we've seen the last of the Apaches? Will they bother us any more?"

"I think there's some of them around now," he replied.

"Santa Claus ought to have shot them."

"Why, you cold-blooded savage!" scoffed Ned. "The idea!"

"You'll see. I'd have done it, myself, if I'd had my gun," declared Stacy bravely.

"Good thing for you that your gun was in camp, instead of in your holster."

"Yes; I'd have lost the gun when the pony went down. Poor pony! Say, Walt," he murmured, leaning over toward his companion.

"This pony of Santa Claus's can jump further than a kangaroo."

"That would be good sport, wouldn't it, Ned?"

"If we didn't break our necks."

"Can't break a Pony Rider Boy's neck. They're too tough," laughed Walter, to which sentiment, Stacy Brown agreed with a series of emphatic nods.

"Say, Tad," called Walter, "what do you say to our jumping our ponies some time to-day?"

"If the stock isn't too tired when we make camp, I think it would be great fun. We haven't had any real jumping contests in a long time."

"Wish we had our stallions here, Tad."

"They're better off at home, Chunky. Altogether too valuable horses for this kind of work. I'll speak to the guide."

"Well, what is it, young man?" smiled Kris Kringle.

"If you can find a level place for our camp we want to have a contest this afternoon. Professor, will you join us?"

"What kind of a contest?"

"We will camp in the foothills of the Black range....