The Pony Rider Boys in Alaska Or, The Gold Diggers of Taku Pass 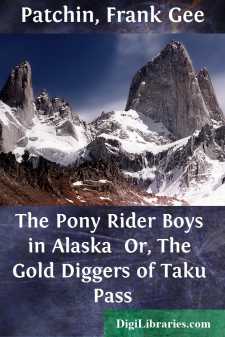 “Captain, who are the four silent men leaning over the rail on the other side of the boat?” asked Tad Butler. “I have been wondering about them almost ever since we left Vancouver. They don’t seem to speak to a person, and seldom to each other, though somehow they appear to be traveling in company. They act as if they were afraid someone would recognize them. I am sure they aren’t bad characters.”

Captain Petersen, commander of the steamer “Corsair,” which for some days had been plowing its way through the ever-changing northern waters, stroked his grizzled beard reflectively.

“Bad characters, eh?” he twinkled. “Well, no, I shouldn’t say as they were. They’re fair-weather lads. I’ll vouch for them if necessary, and I guess I’m about the only person on board that knows who they are.”

Tad waited expectantly until the skipper came to the point of the story he was telling.

“They are the Gold Diggers of Taku Pass, lad.”

“The Gold Diggers of Taku Pass?” repeated Tad Butler. “I don’t think I ever heard that name before. Where is this pass, sir?”

The skipper shook his head.

“That is strange,” wondered Butler. “Does no one know where they dig for gold?”

“No. They don’t even know themselves,” was the puzzling reply.

Tad fixed the weather-beaten face of the skipper with a questioning gaze.

“I don’t think I understand, sir.”

“I’ll tell you what I know about it some other time, lad. I haven’t the time to spin the yarn now. It’s a long one. I’ve been sailing up and down these waters, fair weather and foul, for a good many years, and I’ve seen a fair cargo of strange things in my time, but this Digger outfit is the most peculiar one I ever came across. They are a living example of what the lure of gold means when it gets into a man’s system. Gold is all right. I wish I had more of it; but, my boy, don’t ever let the love of it get to the windward of you if you hope to enjoy peace of mind afterwards,” concluded the skipper with emphasis.

“What’s that he says about gold?” interjected Stacy Brown, more commonly known to his companions as Chunky, the fat boy.

Stacy, with Ned Rector and Walter Perkins, had been lounging against the starboard rail of the “Corsair,” observing Tad and the Captain as they talked. A few paces forward sat Professor Zepplin, their traveling companion, wholly absorbed in a scientific discussion with an engineer who was on his way to an Alaskan mine, of which the latter was to assume control. Many other passengers were strolling about the decks of the “Corsair.” There were seasoned miners with bearded faces; sharp-eyed, sharp-featured men with shifty eyes; pale-faced prospectors on their way to the land of promise, in quest of the yellow metal; capitalists going to Alaska to look into this or that claim with a view to investment; and, more in evidence than all the rest, a large list of tourists bound up the coast on a merry holiday. The former, in most instances, were quiet, reserved men, the latter talkative and boisterous.

“The Captain was speaking of the lure that gold holds for the human race,” replied Tad Butler in answer to Stacy Brown’s question. “I guess the Captain is right, too.”

“I’ve never seen enough gold to become lured by it,” retorted the fat boy. “I should like to see enough to excite me just once. I shouldn’t mind being lured that way. Would you, Walt?”

“I fear you will have to shake yourself–get over your natural laziness–before you can hope to,” chuckled Ned. “I doubt if you would know a lure if you met one on Main Street in Chillicothe.”