"The Pomp of Yesterday" 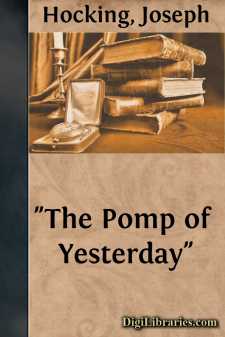 It is now fast approaching four years since our country at the call of duty, and for the world's welfare entered the great struggle which is still convulsing the nations of the earth. What this has cost us, and what it has meant to us, and to other countries, it is impossible to describe. Imagination reels before the thought. Still the ghastly struggle continues, daily comes the story of carnage, and suffering, and loss; and still the enemy who stands for all that is basest, and most degraded in life, stands firm, and proudly vaunts his prowess.

Why is Victory delayed?

That is the question which has haunted me for many months, and I have asked myself whether we, and our Allies, have failed in those things which are essential, not only to Victory, but to a righteous and, therefore, lasting peace.

In this story, while not attempting a full and complete answer to the question, I have made certain suggestions which I am sure the Nation, the Empire, ought to consider; for on our attitude towards them depends much that is most vital to our welfare.

Let it not be imagined, however, that The Pomp of Yesterday is anything in the nature of a polemic, or a treatise. It is first and foremost a story—a romance if you like—of incident, and adventure. But it is more than a story. It deals with vital things, and it deals with them—however inadequately—sincerely and earnestly. The statements, moreover, which will probably arouse a great deal of antagonism in certain quarters, are not inventions of the Author, but were related to him by those in a position to know.

Neither are the descriptions of the Battle of the Somme the result of the Author's imagination, but transcripts from the experiences of some who passed through it. Added to this, I have, since first writing the story, paid a Second Visit to the Front, during which I traversed the country on which Thiepval, Goomecourt, La Boiselle, Contalmaison; and a score of other towns and villages once stood. Because of this, while doubtless a military authority could point out technical errors in my descriptions, I have been able to visualize the scenes of the battle, and correct such mistakes as I made at the time of writing.

One other word. More than once, the chief character in the narrative anticipates what has taken place in Russia. While I do not claim to be a prophet, it is only fair to say that I finished writing the story in August, 1917, when very few dreamt of the terrible chaos which now exists in the once Great Empire on which we so largely depended.

CHAPTER I THE MAN WITHOUT A PAST

My first meeting with the man whose story I have set out to relate was in Plymouth. I had been standing in the harbour, hoping that the friends I had come to meet might yet appear, even although the chances of their doing so had become very small. Perhaps a hundred passengers had landed at the historic quay, and practically all of them had rushed away to catch the London train. I had scrutinized each face eagerly, but when the last passenger had crossed the gangway I had been reluctantly compelled to assume that my friends, for some reason or other, had not come....