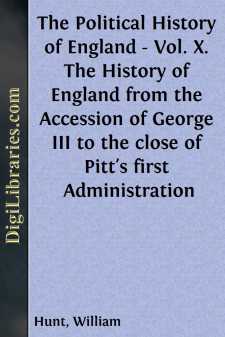 Seventy-five years have passed since Lingard completed his History of England, which ends with the Revolution of 1688. During that period historical study has made a great advance. Year after year the mass of materials for a new History of England has increased; new lights have been thrown on events and characters, and old errors have been corrected. Many notable works have been written on various periods of our history; some of them at such length as to appeal almost exclusively to professed historical students. It is believed that the time has come when the advance which has been made in the knowledge of English history as a whole should be laid before the public in a single work of fairly adequate size. Such a book should be founded on independent thought and research, but should at the same time be written with a full knowledge of the works of the best modern historians and with a desire to take advantage of their teaching wherever it appears sound.

The vast number of authorities, printed and in manuscript, on which a History of England should be based, if it is to represent the existing state of knowledge, renders co-operation almost necessary and certainly advisable. The History, of which this volume is an instalment, is an attempt to set forth in a readable form the results at present attained by research. It will consist of twelve volumes by twelve different writers, each of them chosen as being specially capable of dealing with the period which he undertakes, and the editors, while leaving to each author as free a hand as possible, hope to insure a general similarity in method of treatment, so that the twelve volumes may in their contents, as well as in their outward appearance, form one History.

As its title imports, this History will primarily deal with politics, with the History of England and, after the date of the union with Scotland, Great Britain, as a state or body politic; but as the life of a nation is complex, and its condition at any given time cannot be understood without taking into account the various forces acting upon it, notices of religious matters and of intellectual, social, and economic progress will also find place in these volumes. The footnotes will, so far as is possible, be confined to references to authorities, and references will not be appended to statements which appear to be matters of common knowledge and do not call for support. Each volume will have an Appendix giving some account of the chief authorities, original and secondary, which the author has used. This account will be compiled with a view of helping students rather than of making long lists of books without any notes as to their contents or value. That the History will have faults both of its own and such as will always in some measure attend co-operative work, must be expected, but no pains have been spared to make it, so far as may be, not wholly unworthy of the greatness of its subject.

Each volume, while forming part of a complete History, will also in itself be a separate and complete book, will be sold separately, and will have its own index, and two or more maps....