The Poet's Poet : essays on the character and mission of the poet as interpreted in English verse of the last one hundred and fifty years 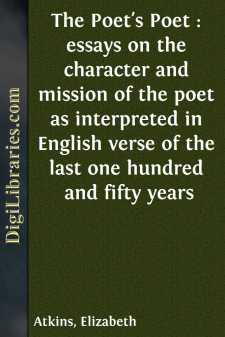 Utterances of poets regarding their character and mission have perhaps received less attention than they deserve. The tacit assumption of the majority of critics seems to be that the poet, like the criminal, is the last man who should pass judgment upon his own case. Yet it is by no means certain that this view is correct. Introspective analysis on the part of the poet might reasonably be expected to be as productive of æsthetic revelation as the more objective criticism of the mere observer of literary phenomena. Moreover, aside from its intrinsic merits, the poet's self-exposition must have interest for all students of Platonic philosophy, inasmuch as Plato's famous challenge was directed only incidentally to critics of poetry; primarily it was to Poetry herself, whom he urged to make just such lyrical defense as we are to consider.

The method here employed is not to present exhaustively the substance of individual poems treating of poets. Analysis of Wordsworth's Prelude, Browning's Sordello, and the like, could scarcely give more than a re-presentation of what is already available to the reader in notes and essays on those poems. The purpose here is rather to pass in review the main body of such verse written in the last one hundred and fifty years. We are concerned, to be sure, with pointing out idiosyncratic conceptions of individual writers, and with tracing the vogue of passing theories. The chief interest, however, should lie in the discovery of an essential unity in many poets' views on their own character and mission.

It is true that there is scarcely an idea relative to the poet which is not somewhere contradicted in the verse of this period, and the attempt has been made to be wholly impartial in presenting all sides of each question. Indeed, the subject may seem to be one in which dualism is inescapable. The poet is, in one sense, a hybrid creature; he is the lover of the sensual and of the spiritual, for he is the revealer of the spiritual in the sensual. Consequently it is not strange that practically every utterance which we may consider,—even such as deal with the most superficial aspects of the poet, as his physical beauty or his health,—falls naturally into one of two divisions, accordingly as the poet feels the sensual or the spiritual aspect of his nature to be the more important Yet the fact remains that the quest of unity has been the most interesting feature of this investigation. The man in whose nature the poet's two apparently contradictory desires shall wholly harmonize is the ideal whom practically all modern English poets are attempting to present.

Minor poets have been considered, perhaps to an unwarranted degree. In the Victorian period, for instance, there may seem something grotesque in placing Tupper's judgments on verse beside Browning's. Yet, since it is true that so slight a poet as William Lisles Bowles influenced Coleridge, and that T. E. Chivers probably influenced Poe, it seems that in a study of this sort minor writers have a place....