The Poetical Works of Oliver Wendell Holmes - Volume 04: Songs in Many Keys 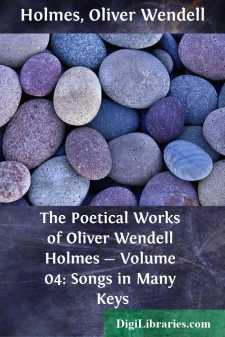 THE piping of our slender, peaceful reedsWhispers uncared for while the trumpets bray;Song is thin air; our hearts' exulting playBeats time but to the tread of marching deeds,Following the mighty van that Freedom leads,Her glorious standard flaming to the day!The crimsoned pavement where a hero bleedsBreathes nobler lessons than the poet's lay.Strong arms, broad breasts, brave hearts, are better worthThan strains that sing the ravished echoes dumb.Hark! 't is the loud reverberating drumRolls o'er the prairied West, the rock-bound NorthThe myriad-handed Future stretches forthIts shadowy palms. Behold, we come,—we come!

Turn o'er these idle leaves. Such toys as theseWere not unsought for, as, in languid dreams,We lay beside our lotus-feeding streams,And nursed our fancies in forgetful ease.It matters little if they pall or please,Dropping untimely, while the sudden gleamsGlare from the mustering clouds whose blackness seemsToo swollen to hold its lightning from the trees.Yet, in some lull of passion, when at lastThese calm revolving moons that come and go—Turning our months to years, they creep so slow—Have brought us rest, the not unwelcome pastMay flutter to thee through these leaflets, castOn the wild winds that all around us blow.May 1, 1861.

The story of Sir Harry Frankland and Agnes Surriage is told in the ballad with a very strict adhesion to the facts. These were obtained from information afforded me by the Rev. Mr. Webster, of Hopkinton, in company with whom I visited the Frankland Mansion in that town, then standing; from a very interesting Memoir, by the Rev. Elias Nason, of Medford; and from the manuscript diary of Sir Harry, or more properly Sir Charles Henry Frankland, now in the library of the Massachusetts Historical Society.

At the time of the visit referred to, old Julia was living, and on our return we called at the house where she resided.—[She was living June 10, 1861, when this ballad was published]—Her account is little more than paraphrased in the poem. If the incidents are treated with a certain liberality at the close of the fifth part, the essential fact that Agnes rescued Sir Harry from the ruins after the earthquake, and their subsequent marriage as related, may be accepted as literal truth. So with regard to most of the trifling details which are given; they are taken from the record. It is greatly to be regretted that the Frankland Mansion no longer exists. It was accidentally burned on the 23d of January, 1858, a year or two after the first sketch of this ballad was written. A visit to it was like stepping out of the century into the years before the Revolution. A new house, similar in plan and arrangements to the old one, has been built upon its site, and the terraces, the clump of box, and the lilacs doubtless remain to bear witness to the truth of this story.

The story, which I have told literally in rhyme, has been made the subject of a carefully studied and interesting romance by Mr. E. L. Bynner.

THE tale I tell is gospel true,As all the bookmen know,And pilgrims who have strayed to viewThe wrecks still left to show.

Ah! maidens err and matrons warnBeneath the coldest sky;Love lurks amid the tasselled cornAs in the bearded rye!

But who would dream our sober siresHad learned the old world's ways,And warmed their hearths with lawless firesIn Shirley's homespun days?