The Poet at the Breakfast-Table 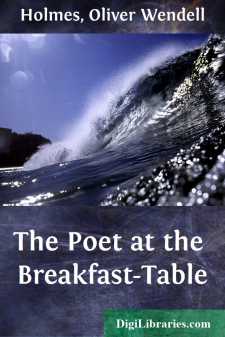 In this, the third series of Breakfast-Table conversations, a slight dramatic background shows off a few talkers and writers, aided by certain silent supernumeraries. The machinery is much like that of the two preceding series. Some of the characters must seem like old acquaintances to those who have read the former papers. As I read these over for the first time for a number of years, I notice one character; presenting a class of beings who have greatly multiplied during the interval which separates the earlier and later Breakfast-Table papers,—I mean the scientific specialists. The entomologist, who confines himself rigidly to the study of the coleoptera, is intended to typify this class. The subdivision of labor, which, as we used to be told, required fourteen different workmen to make a single pin, has reached all branches of knowledge. We find new terms in all the Professions, implying that special provinces have been marked off, each having its own school of students. In theology we have many curious subdivisions; among the rest eschatology, that is to say, the geography, geology, etc., of the "undiscovered country;" in medicine, if the surgeon who deals with dislocations of the right shoulder declines to meddle with a displacement on the other side, we are not surprised, but ring the bell of the practitioner who devotes himself to injuries of the left shoulder.

On the other hand, we have had or have the encyclopaedic intelligences like Cuvier, Buckle, and more emphatically Herbert Spencer, who take all knowledge, or large fields of it, to be their province. The author of "Thoughts on the Universe" has something in common with these, but he appears also to have a good deal about him of what we call the humorist; that is, an individual with a somewhat heterogeneous personality, in which various distinctly human elements are mixed together, so as to form a kind of coherent and sometimes pleasing whole, which is to a symmetrical character as a breccia is to a mosaic.

As for the Young Astronomer, his rhythmical discourse may be taken as expressing the reaction of what some would call "the natural man" against the unnatural beliefs which he found in that lower world to which he descended by day from his midnight home in the firmament.

I have endeavored to give fair play to the protest of gentle and reverential conservatism in the letter of the Lady, which was not copied from, but suggested by, one which I received long ago from a lady bearing an honored name, and which I read thoughtfully and with profound respect.

PREFACE TO THE NEW EDITION.

It is now nearly twenty years since this book was published. Being the third of the Breakfast-Table series, it could hardly be expected to attract so much attention as the earlier volumes. Still, I had no reason to be disappointed with its reception. It took its place with the others, and was in some points a clearer exposition of my views and feelings than either of the other books, its predecessors....