The Poems of Henry Kendall With Biographical Note by Bertram Stevens 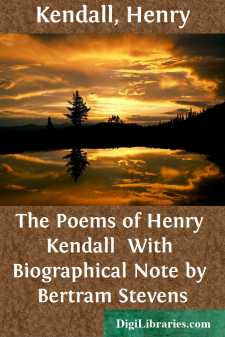 Henry Kendall was the first Australian poet to draw his inspiration from the life, scenery and traditions of the country. In the beginnings of Australian poetry the names of two other men stand with his—Adam Lindsay Gordon, of English parentage and education, and Charles Harpur, born in Australia a generation earlier than Kendall. Harpur's work, though lacking vitality, shows fitful gleams of poetic fire suggestive of greater achievement had the circumstances of his life been more favourable. Kendall, whose lot was scarcely more fortunate, is a true singer; his songs remain, and are likely long to remain, attractive to poetry lovers.

The poet's grandfather, Thomas Kendall, a Lincolnshire schoolmaster, met the Revd. Samuel Marsden when the latter was in England seeking assistants for his projected missionary work in New Zealand. Kendall offered his services to the Church Missionary Society of London and came out to Sydney in 1809. Five years later he was sent to the Bay of Islands as a lay missionary, holding also the first magistrate's commission issued for New Zealand. He soon made friends with the Maoris and learnt their language well enough to compile a primer in pidgin-Maori, 'A Korao no New Zealand; or, the New Zealander's First Book', which George Howe printed for Marsden at Sydney in 1815. In 1820 Thomas Kendall went to England with some Maori chiefs, and while there helped Professor Lee, of Cambridge, to "fix" the Maori language—the outcome of their work being Lee and Kendall's 'Grammar and Vocabulary of the Language of New Zealand', published in the same year.

Returning to New Zealand, Kendall, in 1823, left the Missionary Society and went with his son Basil to Chile. In 1826 he came back to Australia, and for his good work as a missionary received from the New South Wales Government a grant of 1280 acres at Ulladulla, on the South Coast. There he entered the timber trade and became owner and master of a small vessel used in the business. About 1832 this vessel was wrecked near Sydney, and all on board, including the owner, were drowned.

Of Basil Kendall's early career little is known. While in South America he saw service under Lord Cochrane, the famous tenth Earl of Dundonald, who, after five brilliant years in the Chilean service, was, between 1823 and 1825, fighting on behalf of Brazil. Basil returned to Australia, but disappears from view until 1840. One day in that year he met a Miss Melinda McNally, and next day they were married. Soon afterwards they settled on the Ulladulla grant, farming land at Kirmington, two miles from the little town of Milton. There, in a primitive cottage Basil had built, twin sons—Basil Edward and Henry—were born on the 18th April, 1841. Five years later the family moved to the Clarence River district and settled near the Orara. Basil Kendall had practically lost one lung before his marriage, and failing health made it exceedingly difficult for him to support his family, to which by this time three daughters had been added....