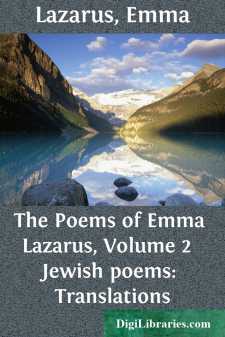 One hesitates to lift the veil and throw the light upon a life so hidden and a personality so withdrawn as that of Emma Lazarus; but while her memory is fresh, and the echo of her songs still lingers in these pages, we feel it a duty to call up her presence once more, and to note the traits that made it remarkable and worthy to shine out clearly before the world. Of dramatic episode or climax in her life there is none; outwardly all was placid and serene, like an untroubled stream whose depths alone hold the strong, quick tide. The story of her life is the story of a mind, of a spirit, ever seeking, ever striving, and pressing onward and upward to new truth and light. Her works are the mirror of this progress. In reviewing them, the first point that strikes us is the precocity, or rather the spontaneity, of her poetic gift. She was a born singer; poetry was her natural language, and to write was less effort than to speak, for she was a shy, sensitive child, with strange reserves and reticences, not easily putting herself "en rapport" with those around her. Books were her world from her earliest years; in them she literally lost and found herself. She was eleven years old when the War of Succession broke out, which inspired her first lyric outbursts. Her poems and translations written between the ages of fourteen and seventeen were collected, and constituted her first published volume. Crude and immature as these productions naturally were, and utterly condemned by the writer's later judgment, they are, nevertheless, highly interesting and characteristic, giving, as they do, the keynote of much that afterwards unfolded itself in her life. One cannot fail to be rather painfully impressed by the profound melancholy pervading the book. The opening poem is "In Memoriam,"—on the death of a school friend and companion; and the two following poems also have death for theme. "On a Lock of my Mother's Hair" gives us reflections on growing old. These are the four poems written at the age of fourteen. There is not a wholly glad and joyous strain in the volume, and we might smile at the recurrence of broken vows, broken hearts, and broken lives in the experience of this maiden just entered upon her teens, were it not that the innocent child herself is in such deadly earnest. The two long narrative poems, "Bertha" and "Elfrida," are tragic in the extreme. Both are dashed off apparently at white heat: "Elfrida," over fifteen hundred lines of blank verse, in two weeks; "Bertha," in three and a half. We have said that Emma Lazarus was a born singer, but she did not sing, like a bird, for joy of being alive; and of being young, alas! there is no hint in these youthful effusions, except inasmuch as this unrelieved gloom, this ignorance of "values," so to speak, is a sign of youth, common especially among gifted persons of acute and premature sensibilities, whose imagination, not yet focused by reality, overreached the mark. With Emma Lazarus, however, this sombre streak has a deeper root; something of birth and temperament is in it—the stamp and heritage of a race born to suffer. But dominant and fundamental though it was, Hebraism was only latent thus far. It was classic and romantic art that first attracted and inspired her. She pictures Aphrodite the beautiful, arising from the waves, and the beautiful Apollo and his loves,—Daphne, pursued by the god, changing into the laurel, and the enamored Clytie into the faithful sunflower. Beauty, for its own sake, supreme and unconditional, charmed her primarily and to the end. Her restless spirit found repose in the pagan idea,—the absolute unity and identity of man with nature, as symbolized in the Greek myths, where every natural force becomes a person, and where, in turn, persons pass with equal readiness and freedom back into nature again.

In this connection a name would suggest itself even if it did not appear,—Heine, the Greek, Heine the Jew, Heine the Romanticist, as Emma Lazarus herself has styled him; and already in this early volume of hers we have trace of the kinship and affinity that afterwards so plainly declared itself. Foremost among the translations are a number of his songs, rendered with a finesse and a literalness that are rarely combined. Four years later, at the age of twenty-one, she published her second volume, "Admetus and Other Poems," which at once took rank as literature both in America and England, and challenged comparison with the work of established writers. Of classic themes we have "Admetus" and "Orpheus," and of romantic the legend of Tannhauser and of the saintly Lohengrin. All are treated with an artistic finish that shows perfect mastery of her craft, without detracting from the freshness and flow of her inspiration. While sounding no absolutely new note in the world, she yet makes us aware of a talent of unusual distinction, and a highly endowed nature,—a sort of tact of sentiment and expression, an instinct of the true and beautiful, and that quick intuition which is like second-sight in its sensitiveness to apprehend and respond to external stimulus. But it is not the purely imaginative poems in this volume that most deeply interest us. We come upon experience of life in these pages; not in the ordinary sense, however, of outward activity and movement, but in the hidden undercurrent of being. "The epochs of our life are not in the visible facts, but in the silent thoughts by the wayside as we walk." This is the motto, drawn from Emerson, which she chooses for her poem of "Epochs," which marks a pivotal moment in her life. Difficult to analyze, difficult above all to convey, if we would not encroach upon the domain of private and personal experience, is the drift of this poem, or rather cycle of poems, that ring throughout with a deeper accent and a more direct appeal than has yet made itself felt. It is the drama of the human soul,—"the mystic winged and flickering butterfly," "flitting between earth and sky," in its passage from birth to death.

A golden morning of June! "Sweet empty sky without a stain." Sunlight and mist and "ripple of rain-fed rills." "A murmur and a singing manifold."

"What simple things be these the soul to raiseTo bounding joy, and make young pulses beatWith nameless pleasure, finding life so sweet!"

Such is youth, a June day, fair and fresh and tender with dreams and longing and vague desire. The morn lingers and passes, but the noon has not reached its height before the clouds begin to rise, the sunshine dies, the air grows thick and heavy, the lightnings flash, the thunder breaks among the hills, rolls and gathers and grows, until

Now we have the phases of the soul,—the shock and surprise of grief in the face of the world made desolate....