The Poems and Fragments of Catullus 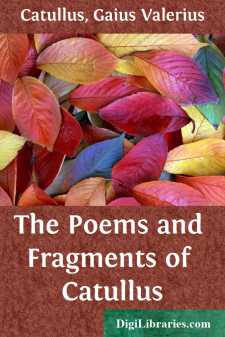 The idea of translating Catullus in the original metres adopted by the poet himself was suggested to me many years ago by the admirable, though, in England, insufficiently known, version of Theodor Heyse (Berlin, 1855). My first attempts were modelled upon him, and were so unsuccessful that I dropt the idea for some time altogether. In 1868, the year following the publication of my larger critical edition of Catullus, I again took up the experiment, and translated into English glyconics the first Hymenaeal, Collis o Heliconici. Tennyson's Alcaics and Hendecasyllables had appeared in the interval, and had suggested to me the new principle on which I was to go to work. It was not sufficient to reproduce the ancient metres, unless the ancient quantity was reproduced also. Almost all the modern writers of classical metre had contented themselves with making an accented syllable long, an unaccented short; the most familiar specimens of hexameter, Longfellow's Evangeline and Clough's Bothie of Tober-na-Vuolich and Amours de Voyage were written on this principle, and, as a rule, stopped there. They almost invariably disregarded position, perhaps the most important element of quantity. In the first line of Evangeline—

This is the forest primeval, the murmuring pines and the hemlocks,

there are no less than five violations of position, to say nothing of the shortening of a syllable so distinctly long as the i in primeval. Mr. Swinburne, in his Sapphics and Hendecasyllables, while writing on a manifestly artistic conception of those metres, and, in my judgment, proving their possibility for modern purposes by the superior rhythmical effect which a classically trained ear enabled him to make in handling them, neglects position as a rule, though his nice sense of metre leads him at times to observe it, and uniformly rejects any approach to the harsh combinations indulged in by other writers. The nearest approach to quantitative hexameters with which I am acquainted in modern English writers is the Andromeda of Mr. Kingsley, a poem which has produced little effect, but is interesting as a step to what may fairly be called a new development of the metre. For the experiments of the Elizabethan writers, Sir Philip Sidney and others, by that strange perversity which so often dominates literature, were as decidedly unsuccessful from an accentual, as the modern experiments from a quantitative point of view. Sir Philip Sidney has given in his Arcadia specimens of hexameters, elegiacs, sapphics, asclepiads, anacreontics, hendecasyllables. The following elegiacs will serve as a sample.

Unto a caitif wretch, whom long affliction holdeth,And now fully believ's help to bee quite perished;Grant yet, grant yet a look, to the last moment of his anguish,O you (alas so I finde) caus of his onely ruine:Dread not awhit (O goodly cruel) that pitie may enterInto thy heart by the sight of this Epistle I send:And so refuse to behold of these strange wounds the recitall,Lest it might m' allure home to thyself to return....
Show more
Show less