The Pleasures of Ignorance 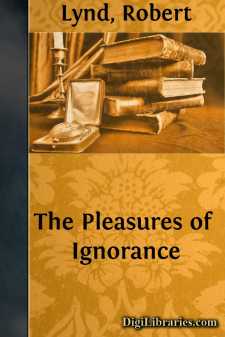 I THE PLEASURES OF IGNORANCE

It is impossible to take a walk in the country with an average townsman—especially, perhaps, in April or May—without being amazed at the vast continent of his ignorance. It is impossible to take a walk in the country oneself without being amazed at the vast continent of one's own ignorance. Thousands of men and women live and die without knowing the difference between a beech and an elm, between the song of a thrush and the song of a blackbird. Probably in a modern city the man who can distinguish between a thrush's and a blackbird's song is the exception. It is not that we have not seen the birds. It is simply that we have not noticed them. We have been surrounded by birds all our lives, yet so feeble is our observation that many of us could not tell whether or not the chaffinch sings, or the colour of the cuckoo. We argue like small boys as to whether the cuckoo always sings as he flies or sometimes in the branches of a tree—whether Chapman drew on his fancy or his knowledge of nature in the lines:

When in the oak's green arms the cuckoo sings,     And first delights men in the lovely springs.

This ignorance, however, is not altogether miserable. Out of it we get the constant pleasure of discovery. Every fact of nature comes to us each spring, if only we are sufficiently ignorant, with the dew still on it. If we have lived half a lifetime without having ever even seen a cuckoo, and know it only as a wandering voice, we are all the more delighted at the spectacle of its runaway flight as it hurries from wood to wood conscious of its crimes, and at the way in which it halts hawk-like in the wind, its long tail quivering, before it dares descend on a hill-side of fir-trees where avenging presences may lurk. It would be absurd to pretend that the naturalist does not also find pleasure in observing the life of the birds, but his is a steady pleasure, almost a sober and plodding occupation, compared to the morning enthusiasm of the man who sees a cuckoo for the first time, and, behold, the world is made new.

And, as to that, the happiness even of the naturalist depends in some measure upon his ignorance, which still leaves him new worlds of this kind to conquer. He may have reached the very Z of knowledge in the books, but he still feels half ignorant until he has confirmed each bright particular with his eyes. He wishes with his own eyes to see the female cuckoo—rare spectacle!—as she lays her egg on the ground and takes it in her bill to the nest in which it is destined to breed infanticide. He would sit day after day with a field-glass against his eyes in order personally to endorse or refute the evidence suggesting that the cuckoo does lay on the ground and not in a nest. And, if he is so far fortunate as to discover this most secretive of birds in the very act of laying, there still remain for him other fields to conquer in a multitude of such disputed questions as whether the cuckoo's egg is always of the same colour as the other eggs in the nest in which she abandons it....