The Playboy of the Western World 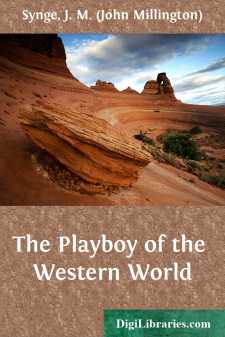 SCENE: [Country public-house or shebeen, very rough and untidy. There is a sort of counter on the right with shelves, holding many bottles and jugs, just seen above it. Empty barrels stand near the counter. At back, a little to left of counter, there is a door into the open air, then, more to the left, there is a settle with shelves above it, with more jugs, and a table beneath a window. At the left there is a large open fire-place, with turf fire, and a small door into inner room. Pegeen, a wild looking but fine girl, of about twenty, is writing at table. She is dressed in the usual peasant dress.]

PEGEEN — [slowly as she writes.] — Six yards of stuff for to make a yellow gown. A pair of lace boots with lengthy heels on them and brassy eyes. A hat is suited for a wedding-day. A fine tooth comb. To be sent with three barrels of porter in Jimmy Farrell's creel cart on the evening of the coming Fair to Mister Michael James Flaherty. With the best compliments of this season. Margaret Flaherty.

SHAWN KEOGH — [a fat and fair young man comes in as she signs, looks round awkwardly, when he sees she is alone.] — Where's himself?

PEGEEN — [without looking at him.] — He's coming. (She directs the letter.) To Mister Sheamus Mulroy, Wine and Spirit Dealer, Castlebar.

PEGEEN. How would you see him (licks stamp and puts it on letter) and it dark night this half hour gone by?

SHAWN — [turning towards the door again.] — I stood a while outside wondering would I have a right to pass on or to walk in and see you, Pegeen Mike (comes to fire), and I could hear the cows breathing, and sighing in the stillness of the air, and not a step moving any place from this gate to the bridge.

PEGEEN — [putting letter in envelope.] — It's above at the cross-roads he is, meeting Philly Cullen; and a couple more are going along with him to Kate Cassidy's wake.

SHAWN — [looking at her blankly.] — And he's going that length in the dark night?

PEGEEN — [impatiently.] He is surely, and leaving me lonesome on the scruff of the hill. (She gets up and puts envelope on dresser, then winds clock.) Isn't it long the nights are now, Shawn Keogh, to be leaving a poor girl with her own self counting the hours to the dawn of day?

SHAWN — [with awkward humour.] — If it is, when we're wedded in a short while you'll have no call to complain, for I've little will to be walking off to wakes or weddings in the darkness of the night.

PEGEEN — [with rather scornful good humour.] — You're making mighty certain, Shaneen, that I'll wed you now.

SHAWN. Aren't we after making a good bargain, the way we're only waiting these days on Father Reilly's dispensation from the bishops, or the Court of Rome.

PEGEEN — [looking at him teasingly, washing up at dresser.] — It's a wonder, Shaneen, the Holy Father'd be taking notice of the likes of you; for if I was him I wouldn't bother with this place where you'll meet none but Red Linahan, has a squint in his eye, and Patcheen is lame in his heel, or the mad Mulrannies were driven from California and they lost in their wits....