The Planet Mars and Its Inhabitants, a psychic revelation 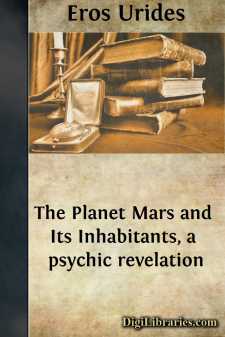 Add to My Favorites
Published: 9 years ago
Downloads: 139
Rating: (0 Votes)

CHAPTER I. THE PLANET MARS AND ITS INHABITANTS

Years ago, as you measure time, I was an inhabitant of Mars, your sister planet. My name is Eros Urides (the latter signifying "of Urid"). But a physical name is only an incidental in one's life.

In the Spirit world we are given a name in accordance with our spiritual qualities and gifts and the kind of work we do.

I came into material being as the fruit of the sacred union of my parents. It is not necessary to say aught concerning their social status, for on Mars all who unfold into a material expression of the Father are equal. Equal in rank, station, and in possession of the material fruits of earth.

After my education had been completed I was, in accordance with the Martian system of scientifically determining one's rightful vocation, assigned as overseer to a section of one of the main canals supplying water from the North Polar cap to an impounding reservoir near the city of Urid, the place of my birth.

I was in the 36th year (Martian reckoning) of my physical life on the planet when my transition occurred, which event was the result of my inability to observe, one night, warning signals sent out from a central station advising the eve of a tremendous drop in temperature. This occurred in the Martian autumn, and I succumbed to the intense cold. I was not married, so I left no immediate family except my parents, brothers and sisters.

I have come to your Earth to give your inhabitants some idea of the idealistic life lived by your more advanced brothers. I use the term idealistic in a relative way only, for in God's universe the degrees of material progress of His children are infinite in number.

In giving this information to the inhabitants of your world I have been assisted by the spirits of many former wise children of your Earth.

The purpose of the information which I am about to impart to your people is mainly to stimulate and hasten into material expression the reign of God's kingdom on your Earth.

Many will reject this information, but it is God's truth nevertheless. But on the other hand, many of God's children now functioning on your planet will accept the statements as true, and they will be helped and encouraged in their hard struggle for material existence. This struggle, unequal as it is, is the result of darkness engendered by the loss of faith in God.

Man's faith in his Creator, in the ages preceding your present era of darkness, was sublime. Man's attitude towards, and his confidence in the promises of God was as the faith of a child to its parents, whom it has always trusted. But selfishness has gained the upper hand, and is now man's master on your Earth. To break the chains now binding man to self is the purpose of God's holy emissaries, who have descended from high spiritual spheres to your Earth to teach and show men the way out of bondage. They will succeed, for Omniscience has commanded it. It is under their direction that I am now contributing my little part in this movement.

I am only too glad to have been able to give the information contained in this book, and I also appreciate the assistance of all those on your Earth plane who so willingly assisted; but of course we are all obeying the Father's command....