The Place Beyond the Winds 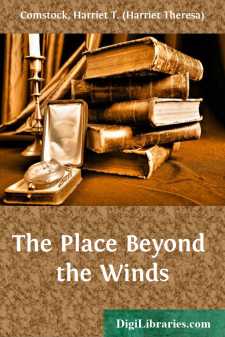 Priscilla Glenn stood on the little slope leading down from the farmhouse to the spring at the bottom of the garden, and lifted her head as a young deer does when it senses something new or dangerous. Suddenly, and entirely subconsciously, she felt her kinship with life, her relation to the lovely May day which was more like June than May—and a rare thing for Kenmore—whose seasons lapsed into each other as calmly and sluggishly as did all the other happenings in that spot known to the Canadian Indians as The Place Beyond the Wind—the In-Place.

Across Priscilla's straight, young shoulders lay a yoke from both ends of which dangled empty tin pails, destined, sooner or later, to be filled with that peculiarly fine water of which Nathaniel Glenn was so proud. Nathaniel Glenn never loved things in a human, tender fashion, but he was proud of many things—proud that he, and his before him, had braved the hardships of farming among the red, rocky hills of Kenmore instead of wrenching a livelihood from the water. This capacity for tilling the soil instead of gambling in fish had made of Glenn, and a few other men, the real aristocracy of the place. Nathaniel's grandfather, with his wife and fifteen children, had been the first white settlers of Kenmore. So eager had the Indians been to have this first Glenn among them that it is said they offered him any amount of land he chose to select, and Glenn had taken only so much as would insure him a decent farm and prospects. This act of restraint had further endeared him to the natives, and no regret was ever known to follow the advent of the estimable gentleman.

The present Glenn never boasted; he had no need to; the plain statement of fact was enough to secure his elevated position from mean attack.

Nathaniel had taught himself to read and write—a most unusual thing—and naturally he was proud of that. He was proud of his stern, bleak religion that left no doubt in his own mind of his perfect interpretation of divine will. He was proud of his handsome wife—twenty years younger than himself. Inwardly he was proud of that, within himself, which had been capable of securing Theodora where other men had failed. Theodora had caused him great disappointment, but Nathaniel was a just man and he could not exactly see that his disappointment was due to any deliberate or malicious act of Theodora's; it was only when his wife showed weak tendencies toward making light of the matter that he hardened his heart.

In the face of his great desire and his modest aspirations—Theodora had borne for him (that was the only way he looked at it) five children—all girls, when she very well knew a son was the one thing, in the way of offspring, that he had expected or wanted.

The first child was as dark as a little Indian, "so dark," explained Nathaniel, "that she would have been welcome in any house on a New Year's Day." She lasted but a year, and, while she was a regret, she had been tolerated as an attempt, at least, in the right direction. Then came the second girl, a soft, pale creature with ways that endeared her to the mother-heart so tragically that when she died at the age of two Theodora rebelliously proclaimed that she wanted no other children! This blasphemy shocked Nathaniel beyond measure, and when, a year later, twin girls were born on Lonely Farm, he pointed out to his wife that no woman could fly in the face of the Almighty with impunity and she must now see, in this double disgrace of sex, her punishment.

Theodora was stricken; but the sad little sisters early escaped the bondage of life, and the Glenns once again, childless and alone, viewed the future superstitiously and with awe....