The Pirate of the Mediterranean A Tale of the Sea 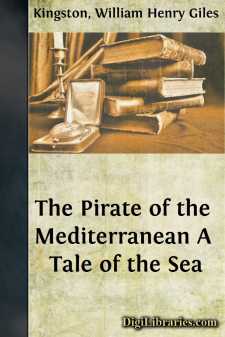 Malta, which I have selected as the opening scene of the following story, is, from its historical recollections, its fine climate, and brilliant skies, a very interesting spot; although, for such beauty as its scenery possesses, it must be acknowledged that it is indebted very much more to art than to nature. Notwithstanding, however, the noise it has made in the world, and will, I suspect, should we ever be driven into a war with our vivacious continental neighbour, again make, it is but a rock some twenty miles long, and twelve broad, in the middle of the Mediterranean, with a smaller rock, Gozo, to the north of it, and was, probably, at one time of this planet’s existence, merely a continuation of Sicily or Italy’s toe, or a lump, as it were, kicked off into the middle of the sea. If, also, report speaks true, the very soil which gives verdure to its valleys, and nourishes its sweet-scented orange-groves, was imported from richer lands; yet, notwithstanding this, a larger number of inhabitants of every religion, colour, and costume, continue to exist on its surface, than on any similar-sized portion of the globe. But in its capital, Valetta, with its magnificent fortifications, and superb harbour, are centred its chief attractions, and which have gained for it a name imperishable on the page of history as the bulwark of Christendom, against the pagan hosts of the Saracens.

But as my tale is with the present rather than with the past, I will not stop to describe how, when it was called Mileta, Saint Paul landed on the island,—how the Vandals and Goths took possession of it, and were driven out by Belisarius,—how in 1530, the Knights of Saint John of Jerusalem, driven away from Rhodes, here settled,—how they built a fortress which withstood the mighty army of the Turks, and how those gallant gentlemen hurled back the infidels defeated and disgraced,—how they at length degenerated, and its inhabitants, deceived by treachery from within and without their gates, yielded their liberty to the great enemy of Europe, Buonaparte, and were unmercifully ill-treated, and pillaged,—and how, in the year 1800, with the the aid of an English fleet and a small English army, they drove out their conquerors, and put themselves under the protection of Great Britain.

How Mr Cameron was first Civil Commissioner, and was succeeded by Sir Alexander Ball, a man justly endeared to the inhabitants as the sharer of their toils and victory,—how he was followed by Sir Hildebrand Oakes, after whom reigned, as their first Governor, for eleven years, commencing in 1813, Sir Thomas Maitland, called by irreverent lips, King Tom; a gallant soldier, and the terror of ill-doers, on whose decease the Marquis of Hastings and General Ponsonby successively became chiefs.

It was during the time that one of the three last-mentioned governors ruled the land, that the events I am about to narrate took place, and as it is in the capital, Valetta, and its magnificent harbour, that our scene more particularly lies, it is somewhat important that the reader should have them described to him....