The 'Pioneer': Light Passenger Locomotive of 1851 United States Bulletin 240, Contributions from the Museum of History and Technology, paper 42, 1964 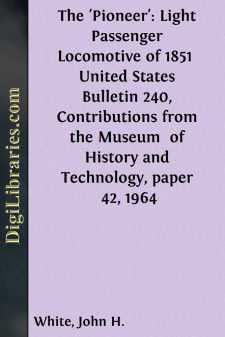 In the mid-nineteenth century there was a renewed interest in the light, single-axle locomotives which were proving so very successful for passenger traffic. These engines were built in limited number by nearly every well-known maker, and among the few remaining is the 6-wheel “Pioneer,” on display in the Museum of History and Technology, Smithsonian Institution. This locomotive is a true representation of a light passenger locomotive of 1851 and a historic relic of the mid-nineteenth century.

The Author: John H. White is associate curator of transportation in the Smithsonian Institution’s Museum of History and Technology.

The “Pioneer” is an unusual locomotive and on first inspection would seem to be imperfect for service on an American railroad of the 1850’s. This locomotive has only one pair of driving wheels and no truck, an arrangement which marks it as very different from the highly successful standard 8-wheel engine of this period. All six wheels of the Pioneer are rigidly attached to the frame. It is only half the size of an 8-wheel engine of 1851 and about the same size of the 4—2—0 so common in this country some 20 years earlier. Its general arrangement is that of the rigid English locomotive which had, years earlier, proven unsuitable for use on U.S. railroads.

These objections are more apparent than real, for the Pioneer, and other engines of the same design, proved eminently successful when used in the service for which they were built, that of light passenger traffic. The Pioneer’s rigid wheelbase is no problem, for when it is compared to that of an 8-wheel engine it is found to be about four feet less; and its small size is no problem when we realize it was not intended for heavy service. Figure 2, a diagram, is a comparison of the Pioneer and a standard 8-wheel locomotive.

Since the service life of the Pioneer was spent on the Cumberland Valley Railroad, a brief account of that line is necessary to an understanding of the service history of this locomotive.

Exhibits of the “Pioneer”

The Pioneer has been a historic relic since 1901. In the fall of that year minor repairs were made to the locomotive so that it might be used in the sesquicentennial celebration at Carlisle, Pennsylvania. On October 22, 1901, the engine was ready for service, but as it neared Carlisle a copper flue burst. The fire was extinguished and the Pioneer was pushed into town by another engine. In the twentieth century, the Pioneer was displayed at the Louisiana Purchase Exposition, St. Louis, Missouri, in 1904, and at the Wheeling, West Virginia, semicentennial in 1913. In 1927 it joined many other historic locomotives at the Baltimore and Ohio Railroad’s “Fair of the Iron Horse” which commemorated the first one hundred years of that company. From about 1913 to 1925 the Pioneer also appeared a number of times at the Apple-blossom Festival at Winchester, Virginia. In 1933-1934 it was displayed at the World’s Fair in Chicago, and in 1948 at the Railroad Fair in the same city. Between 1934 and March 1947 it was exhibited at the Franklin Institute, Philadelphia, Pennsylvania.