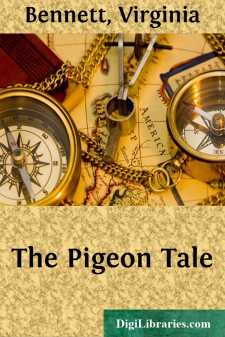 Something unusual was about to happen—any one could see that; the tall pine trees swayed and nodded to each other as if whispering together, the leaves blew up against a corner of the fence as though they meant to sweep the old-fashioned brick path clean, and the gate swung to and fro on its hinges as in anticipation of a visitor.

In a far-away corner of the United States stood an old farm-house which had put on its company manners and quite left off being an every-day house, though it really never could be called an “every-day” house—it was too old for that.

Ever so many children had been born there, and had grown up under its sheltering roof, loved, married and had gone out into the world; it was a very old house, and could have told wonderful stories if any one had listened to them; no, it could not be called an every-day house at all, but to-day it had a look of expectancy quite different from its usual sleepy air.

The ancient box-hedge by the rose-garden stood like an old soldier at attention, so! The fresh muslin curtains at the window were stiff with starch, they would not stir an inch to the breeze blowing in. The old farm-house was trying to look young again, that was it! To look young again: how many of us can do that, eh! for it was expecting a visitor, a very young visitor indeed, a little boy was coming.

He was not an ordinary little boy, or at least the people at the farm-house (Aunt Laura and Uncle Sam) did not think so—because his mother when she was a little girl had gone there for a visit years and years ago, just as he was coming to-day, and she had loved every nook and cranny of the old house as they hoped he would love it, and to those two people, it seemed almost as if she were coming back again, which really couldn’t happen, for that was ever so long ago.

But she had sent her little boy instead, hoping that the change of air would do him good after the winter months spent leaning over school books. So in the quaint low-ceiled bedroom upstairs, sheets that smelled of lavender, with beautiful hand-embroidered initials, made by some bride for her trousseau long ago, were spread on the tall four-poster bed with its curious starched valence and silk patch-work quilt; the pitcher on the wash-stand had been filled to the brim with cool clear spring water, queer knit towels in basket weave design hung ready for use, and a delicious odor of home-made bread floated up from the regions below.

It was the little boy’s first journey, everything was new to him—when he got off at the station Uncle Sam met him and lifted him up to the front seat of the carriage with his hand bag tucked in behind, as he had lifted the little boy’s mother up and seated her beside him, years ago. And so they drove out together along the broad country roads, past the green meadows, where quiet cows cropped the grass, until they came within sight of the farm and windmill and turned into the leafy lane under the spreading chestnut trees and stopped at the gate.

Aunt Laura was there to welcome him.

Aunt Laura was there to welcome him—the little boy’s name was Laurie, he had been given the name out of compliment to Aunt Laura; somehow or other it was almost like “coming home” instead of “going away” he thought, it was so home-like; perhaps it was because everything was so very, very old, that their newness and strangeness had entirely worn off....