The Pianolist A Guide for Pianola Players 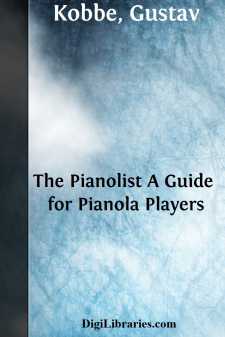 I. THE TITLE AND PURPOSE OF THIS BOOK

My book, "How to Appreciate Music," in the chapter devoted to the pianoforte, contains a paragraph relating to the Pianola and its influence in popularizing music and stimulating musical taste. I confess that before I started that paragraph I was puzzled to know what term to use in designating the instrument I had in mind. "Mechanical piano-player" is a designation which not only does not appeal to me, but, furthermore, fails to do justice to the instrument, which, although mechanical in its working, is far from being mechanical in its effects.

The result?—I took a cross cut and arrived straight at the word Pianola as being the name of the most widely known piano-player, and happily derived from the name of the most widely known instrument, the pianoforte or, as it is more popularly termed, the piano. For this reason the term Pianola was used in the paragraph referred to and now is employed in this book; and, for the same reason, this book is called "The Pianolist." It is believed to be the title least requiring explanation, if, indeed, it requires any explanation at all. Right here, however, I must add that the company which manufactures the Pianola objects to the use of the word as a generic term.

So much for the title. Now for the purpose of this book.

Soon after the publication of "How to Appreciate Music" I discovered that the paragraph concerning this new musical instrument had made a hit. It was widely quoted as evidence of the "up-to-dateness" of the book and I began to receive letters from pianola owners who were pleased that the merits of the instrument should have been recognized in a serious book on music. Among these was a letter from a Mr. Harry Mason, of Detroit, suggesting that I should write a book for the use of those who owned piano-players. Mr. Mason and myself never have met. He knows me merely as an author of a book on music. All I know of him is that he is one of the editors of a druggists' trade paper in Detroit. Yet from him has come the suggestion which has led me to write this book, although, to judge from his letter, he had not been deeply interested in music until he began to use a "player" and, through it, was led to ask for a book which would tell him, in untechnical language, something about an art that was beginning to have eloquence and meaning for him. To me this is highly significant, for there must be thousands of others like him all over the country, to whom, in the same way, the great awakening just is coming through the pianola—at first a means of amusement, then an educator with the element of amusement, but of a higher order, left in!

Shortly after I received Mr. Mason's letter an incident added greatly to the force of his suggestion. I always have been very fond of Schubert's "Rosamunde" impromptu. The first person I heard play it publicly was Annette Essipoff, a Russian pianist and one of the very few great women pianists of the world. Frequently I have heard it since then, but never so charmingly interpreted excepting—But that is the most interesting part of the story....