The Physical Life of Woman: Advice to the Maiden, Wife and Mother 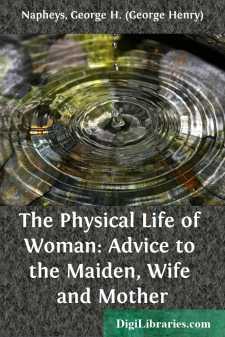 Were man's life measured by his deeds, as the poet suggests, how brief would be the long years of many an octogenarian, and how extended the short span which has been allotted to not a few of the world's famous heroes!

This oft-repeated thought strikes us forcibly in considering the biography of the subject of this sketch. Closing his life at an age when most professional men are but beginning theirs, he had already studied broadly, had traveled widely over two continents, had gained credit and fame by the sword and the pen, and had amassed a fund of erudition and experience which the more lethargic lives of most men fail to approach after twice his length of days. It is eminently appropriate that a record of his busy career should be attached to the works on which his celebrity is chiefly bound, and in which he most conspicuously displays that command of language and happy facility of imparting instruction for which he was so remarkable.

George Henry Napheys (pronounced NÄ´feez, the Ä as in fate) was born in the city of Philadelphia, March 5th, 1842. His parents died while he was still at a tender age, and he was placed with some relatives who resided in the city. From early years he was characterized by quick perceptions and a retentive memory. In the Philadelphia High School, from which he received the academic degree of Master of Arts, he was considered the best scholar in his class, a marked distinction in view of the large numbers which attend that institution. Besides acquiring the usual studies of the High School, he gave considerable time to phonography, in which he became so skilled that he could report any ordinary speaker with entire accuracy. This subsequently proved a great advantage to him in his medical career.

After his graduation he repaired to Hartford, Conn., where he was offered and accepted the position of private secretary to a gentleman of prominence in the literary and religious world.

Thus he was engaged when the civil war broke out. With his natural warmth of feeling and strong emotions, he entered the fray among the first, and went out as Lieutenant, and subsequently as Captain, Company F, 10th Connecticut State Volunteers. The regiment was enlisted for nine months, and was dispatched to Louisiana, General Banks then commanding the Department. It participated in engagements near Baton Rouge and on the Red River, in which Captain Napheys always acquitted himself with bravery and credit.

At the time the regiment was disbanded, an early preference for medical subjects led him to devote a year to the preliminary studies of that profession, but not waiting the full period required for a degree, he was appointed assistant medical officer on the U. S. steamer Mingo, of the South Atlantic Blockading Squadron. On her he passed a number of months, cruising off the coast of the Carolinas and Georgia, and ascended the St. John river.

These active duties prevented him from receiving his degree of Doctor of Medicine until after the close of the war, when, in 1866, his diploma was conferred upon him by the Jefferson Medical College of Philadelphia, one of the most renowned institutions of our country.

After graduation, he opened an office in Philadelphia, and connected himself with the clinics which are held at the College for the purpose of supplying medicine and medical advice to the poor gratuitously, as well as for giving students an opportunity of witnessing various forms of disease....