The Photoplay A Psychological Study 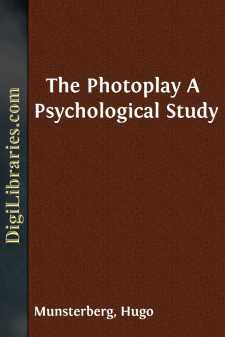 CHAPTER I THE OUTER DEVELOPMENT OF THE MOVING PICTURES

It is arbitrary to say where the development of the moving pictures began and it is impossible to foresee where it will lead. What invention marked the beginning? Was it the first device to introduce movement into the pictures on a screen? Or did the development begin with the first photographing of various phases of moving objects? Or did it start with the first presentation of successive pictures at such a speed that the impression of movement resulted? Or was the birthday of the new art when the experimenters for the first time succeeded in projecting such rapidly passing pictures on a wall? If we think of the moving pictures as a source of entertainment and esthetic enjoyment, we may see the germ in that camera obscura which allowed one glass slide to pass before another and thus showed the railway train on one slide moving over the bridge on the other glass plate. They were popular half a century ago. On the other hand if the essential feature of the moving pictures is the combination of various views into one connected impression, we must look back to the days of the phenakistoscope which had scientific interest only; it is more than eighty years since it was invented. In America, which in most recent times has become the classical land of the moving picture production, the history may be said to begin with the days of the Chicago Exposition, 1893, when Edison exhibited his kinetoscope. The visitor dropped his nickel into a slot, the little motor started, and for half a minute he saw through the magnifying glass a girl dancing or some street boys fighting. Less than a quarter of a century later twenty thousand theaters for moving pictures are open daily in the United States and the millions get for their nickel long hours of enjoyment. In Edison's small box into which only one at a time could peep through the hole, nothing but a few trite scenes were exhibited. In those twenty thousand theaters which grew from it all human passions and emotions find their stage, and whatever history reports or science demonstrates or imagination invents comes to life on the screen of the picture palace.

Yet this development from Edison's half-minute show to the "Birth of a Nation" did not proceed on American soil. That slot box, after all, had little chance for popular success. The decisive step was taken when pictures of the Edison type were for the first time thrown on a screen and thus made visible to a large audience. That step was taken 1895 in London. The moving picture theater certainly began in England. But there was one source of the stream springing up in America, which long preceded Edison: the photographic efforts of the Englishman Muybridge, who made his experiments in California as early as 1872. His aim was to have photographs of various phases of a continuous movement, for instance of the different positions which a trotting horse is passing through. His purpose was the analysis of the movement into its component parts, not the synthesis of a moving picture from such parts....