The Philosophy of Style 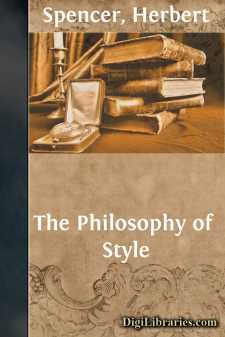 i. The Principle of Economy.

§ 1. Commenting on the seeming incongruity between his father's argumentative powers and his ignorance of formal logic, Tristram Shandy says:—"It was a matter of just wonder with my worthy tutor, and two or three fellows of that learned society, that a man who knew not so much as the names of his tools, should be able to work after that fashion with them." Sterne's intended implication that a knowledge of the principles of reasoning neither makes, nor is essential to, a good reasoner, is doubtless true. Thus, too, is it with grammar. As Dr. Latham, condemning the usual school-drill in Lindley Murray, rightly remarks: "Gross vulgarity is a fault to be prevented; but the proper prevention is to be got from habit—not rules." Similarly, there can be little question that good composition is far less dependent upon acquaintance with its laws, than upon practice and natural aptitude. A clear head, a quick imagination, and a sensitive ear, will go far towards making all rhetorical precepts needless. He who daily hears and reads well-framed sentences, will naturally more or less tend to use similar ones. And where there exists any mental idiosyncrasy—where there is a deficient verbal memory, or an inadequate sense of logical dependence, or but little perception of order, or a lack of constructive ingenuity; no amount of instruction will remedy the defect. Nevertheless, some practical result may be expected from a familiarity with the principles of style. The endeavour to conform to laws may tell, though slowly. And if in no other way, yet, as facilitating revision, a knowledge of the thing to be achieved—a clear idea of what constitutes a beauty, and what a blemish—cannot fail to be of service.

§ 2. No general theory of expression seems yet to have been enunciated. The maxims contained in works on composition and rhetoric, are presented in an unorganized form. Standing as isolated dogmas—as empirical generalizations, they are neither so clearly apprehended, nor so much respected, as they would be were they deduced from some simple first principle. We are told that "brevity is the soul of wit." We hear styles condemned as verbose or involved. Blair says that every needless part of a sentence "interrupts the description and clogs the image;" and again, that "long sentences fatigue the reader's attention." It is remarked by Lord Kaimes, that "to give the utmost force to a period, it ought, if possible, to be closed with that word which makes the greatest figure." That parentheses should be avoided and that Saxon words should be used in preference to those of Latin origin, are established precepts. But, however influential the truths thus dogmatically embodied, they would be much more influential if reduced to something like scientific ordination. In this, as in other cases, conviction will be greatly strengthened when we understand the why. And we may be sure that a comprehension of the general principle from which the rules of composition result, will not only bring them home to us with greater force, but will discover to us other rules of like origin....