The Philippine Islands, 1493-1898 - Volume 25 of 55 1635-36 Explorations by Early Navigators, Descriptions of the Islands and Their Peoples, Their History and Records of the Catholic Missions, As Related in Contemporaneous Books and Manuscripts, Showing the Political, Economic, Commercial and Religious Conditions of Those Islands from Their Earliest Relations with European Nations to the Close of the Nineteenth Century 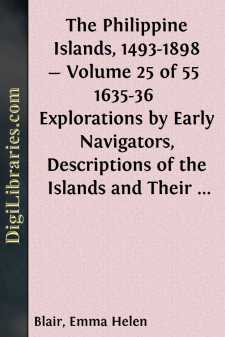 The scope of the present volume (1635–36) is mainly commercial and financial matters on the one hand, and ecclesiastical affairs on the other. The paternalistic tendencies of the Spanish government are obvious in the former direction, with various restrictions on trade, and annoying imposts on all classes of people. The Portuguese of Macao are accused of ruining the Chinese trade with the islands, absorbing it to their own profit and the injury of the Spaniards. In ecclesiastical circles, the topic of prime interest is the controversy between Governor Corcuera and Archbishop Guerrero, ending in the latter’s exile to Mariveles Island; it is an important episode in the continual struggle between Church and State for supremacy, and as such rightly demands large space and attention in this series. In this and several other documents may be noticed the steadily increasing influence and power of the Jesuit order in the Philippines at that period.

From Recopilación de leyes de las Indias (lib. ix, tit. xxxxv) are compiled a series of laws relating to navigation and commerce, dated from 1611 to 1635—in continuation of those already given in Vol. XVII of this series. Married men going from Nueva España must take their wives also, or provide for them while absent. Convents shall not allow Chinese merchandise to be concealed in their houses. Royal officials who may sail in any fleet sent from Spain to the Philippines are forbidden to carry any merchandise thither on their private accounts. Flour for government use in the islands shall be provided there, and not be brought from Nueva España. The lading on the trading ships to that country must be allotted more equitably, and for the general welfare of the Philippine colonists. Disabled or incapable seamen must not be taken on these ships; provision is made for the protection and safety of the Indian deck-hands thereon; and only persons of rank are allowed to carry more than one slave each. Trade between Mexico and Peru is again forbidden; and private persons in the Philippines are not permitted to send ships, soldiers, or seamen to the mainland or other regions outside the islands. The valuation of merchandise taken to Nueva España from Filipinas shall be made at Mexico, according to certain regulations. The officers of the trading ships shall be paid for four months only, each voyage; and the ships must leave Acapulco by December, and reach the islands by March. Extortion from the sailors by the royal officials at Acapulco is strictly forbidden. The official appointed to inspect the Chinese ships at Manila must be chosen, not by the governor alone, but by him and the Audiencia jointly. The shipment of money from New Mexico to Filipinas in excess of the amount allowed is forbidden under heavy penalties. The governors of Filipinas must keep the shipyards well equipped and provided. The ships that sail thence to Nueva España must depart in June; and careful account must be taken, by special officials, of all goods in the cargoes, and of all that the vessels carry on the return trip....