The Philippine Islands, 1493-1898 - Volume 22 of 55 1625-29 Explorations by early navigators, descriptions of the islands and their peoples, their history and records of the catholic missions, as related in contemporaneous books and manuscripts, showing the political, economic, commercial and religious conditions of those islands from their earliest relations with European nations to the close of the nineteenth century. 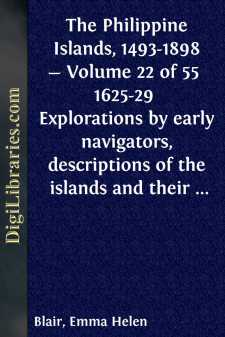 On the occasion of a letter written to your Majesty by Don Alonso Fajardo de Tenzá, governor and captain-general of the Filipinas Islands, and president of the royal Audiencia established therein, on the seventeenth of August of the past year 623, petitioning among other things for permission to come to España, the Council advised your Majesty of what occurred to them with regard to the appointment to that office. Your Majesty was pleased to order that persons be proposed for it, and that a relation be made, in the report of the Council, of the pretensions of Don Alonso; and that action be immediate, so that he whom your Majesty should appoint might sail in the trading-fleet bound for Nueva España—or, if he should be in the Yndias, that he might be advised so that he could sail in March of the coming year for Filipinas. [Your Majesty also ordered] that Don Alonso’s pay should run until his departure thence in the first vessel, and one year longer, in order that he might come here. In fulfilment of your Majesty’s orders, it appears that the demands of Don Alonso Fajardo are reduced to a [22] better office in reward for his services and those of his father and forbears; and that your Majesty, by providing what you deem best, make good his pay during all the time while he should be detained there without power to embark, and one year longer, to enable him to come to these kingdoms, offering his person to serve in this interim at the order of his successor. Don Juan Fajardo, his brother, wrote to me, the president, in a letter of November 4 of the past year that, since Don Alonso desires leave to go to España, it must be after there has been time to conclude the inspection that was ordered to be made of him and the Audiencia, and after your Majesty has assigned him a post in the Council of War with an adequate salary. In accordance with the charges against him, Don Juan petitions that the permission be revoked until he himself shall return from the expedition of Brazil and come to this court. Will your Majesty show him the favor that may be your pleasure.

The Council having examined personally the services and merits that follow for this office (which carries a salary of eight thousand pesos de minas, of four hundred and fifty maravedis apiece), those who are considered most fitting to receive that office—which must be held for eight years, in accordance with the order given regarding it—are proposed to your Majesty. The first two have seven votes.

Don Geronimo Agustin, of the habit of Calatrava, who has served from the year 88. In that of 89, the duke of Terra Nova, while governor of Milan, assigned him a Spanish infantry company of arquebusiers in the regiment of Lombardia. The same year he went to Flandes, where, at different periods, [23] he served for ten years with appointments and infantry companies; and the last three years as captain and sargento-mayor of the regiments of the masters-of-camp, Don Yñigo de Borja, Don Alvaro Huaser, Don Fernando Giron, and Don Alonso de Leyla....