The Philippine Islands, 1493-1898 - Volume 11 of 55 1599-1602 Explorations by Early Navigators, Descriptions of the Islands and Their Peoples, Their History and Records of the Catholic Missions, as Related in Contemporaneous Books and Manuscripts, Showing the Political, Economic, Commercial and Religious Conditions of Those Islands from Their Earliest Relations with European Nations to the Close of the Nineteenth Century 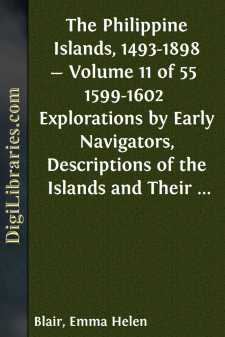 During the three years or more covered in this volume (1599-1602), the most notable occurrence is the coming to the archipelago (in 1600) of the fleet commanded by the Dutch adventurer Oliver van Noordt, bent on plunder and the damage of the Spanish settlements there: but he is defeated and driven away, although with heavy loss to the Spaniards. This event, with the quarrels which it arouses in Manila, and fears of like danger in the future, disturb the colony for several years. The people, both Spaniards and Indians, are also in constant dread of the Moro pirates, who ravage the coasts of the Pintados (Visayas) Islands, encouraged to commit these depredations by the late withdrawal of Spanish troops from Mindanao. In the face of all these difficulties, the government is also embarrassed by the poverty of the local treasury; its funds are wasted by unnecessary expenses and salaries, and lessened by frauds in the customs duties, and by other violations of the laws regarding trade. There are too many officials, both secular and religious; and the former are often incompetent or corrupt. The Indians are demoralized by having learned the use of the white men's money; their native industries are neglected, which causes scarcity and high prices of goods and supplies. New impulse and wider scope are given to the missions conducted by the Jesuits, who begin the task of gathering the scattered Indian converts into mission villages, thus more easily to civilize and christianize the natives. A new governor for the islands is appointed, Pedro de Acuña.

In this volume is completed the document begun in Vol. X, "Ordinances of the Audiencia enacted in 1598-99;" here are presented those for the first half of the year 1599. The alcaldes-mayor must, in collecting the taxes, observe the royal tariffs. To remedy the exorbitant charges for fees in the inferior courts, all suits appealed to the Audiencia must be accompanied by a sworn statement of the fees thus paid. The bonds accepted in law-suits must be more reliable. Auditors are given special powers in expediting the cases of persons imprisoned. Interpreters are not allowed to trade with the natives, except in the presence of a magistrate. The accounts of guardians of minors shall be examined by the probate judge. Attorneys are restricted in bringing new suits between Indians. Goods sold at auction for the benefit of the royal treasury must be knocked down to the highest bidder, and for cash only. Lawyers are ordered to follow the customs of the natives, where these are involved in lawsuits. Collection of tributes shall not be made by the alcaldes-mayor; and appointments for the post of collector must be approved by the Audiencia. Various acts prescribe the duties of officials of the Audiencia, and its procedures in certain cases; also limits of action by attorneys. The officials of the Audiencia shall give bonds each year. Cases involving twenty pesos or less shall not be brought to trial. Directions are given for the trial of suits between Indians....