The Philippine Islands, 1493-1898 - Volume 07 of 55 1588-1591 Explorations by Early Navigators, Descriptions of the Islands and Their Peoples, Their History and Records of the Catholic Missions, as Related in Contemporaneous Books and Manuscripts, Showing the Political, Economic, Commercial and Religious Conditions of Those Islands from Their Earliest Relations with European Nations to the Close of the Nineteenth Century 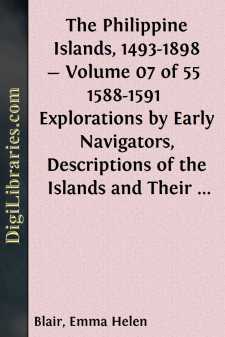 Important events and changes occur during the four years included in the scope of this volume. The Audiencia is suppressed, and in its place is sent a royal governor; the instructions given to him embody many of the reforms demanded by the people through their envoy Sánchez. Extensive and dangerous conspiracies among the natives against the Spaniards are discovered, and severely punished. Trade between Nueva España and China is beginning, and seems to menace the welfare of the Philippine colony. A large immigration of Chinese to the islands has set in, and is already seriously affecting economic interests there. The city of Manila, recently destroyed by fire, is being rebuilt, this time mainly with brick and stone. As usual, there is much friction between the ecclesiastical and secular authorities, largely concerning the collection of tributes from the Indians; the most prominent figure in these contentions is the aged but fiery bishop, Salazar.

Shortly after the Jesuit Sánchez had gone to Spain as envoy of the Philippine colonists, a document was prepared (December 31, 1586), by order of the Manila cabildo, to be sent to him for use at the Spanish court. As this was lost on the “Santa Ana,” and as Bishop Salazar regards the supply of missionaries Page 5in the islands as very inadequate, he applies (June 3, 1588) to the cabildo for another copy of such part of this document as relates to the religious needs of the natives. This he sends (June 25) to the royal Council of the Indias, with considerable additions regarding certain islands not mentioned in the cabildo's memorial. This document gives much interesting information, not only on religious matters, but on the social and economic conditions of both Spaniards and natives in the islands. In each island or province are enumerated the population, both native and Spanish; the number of Spanish troops, also of encomiendas and tributarios; the number of convents and their inmates; the religious and ecclesiastics, not only those resident, but those needed among the natives; the officials employed by the government; the Chinese immigrants and their occupations; the articles for sale in the public market; and the imports and exports at Manila. The writer relates many things of interest regarding the natural resources and products of the country, the mode of life of both Spaniards and natives, the means of defense possessed by the colony, the Indians who are not as yet under Spanish rule. All this affords a valuable and curiously interesting picture of the colony and its life; but Salazar, in presenting it, is mainly concerned with the great need of more religious instruction for the natives, and earnestly entreats the king to send more friars and ecclesiastics for the purpose.

A letter from Santiago de Vera to the king (dated June 26, 1588) gives his report for the past year. He recounts the exploits of the English adventurer Candish against Spanish commerce. Hereafter the ships which carry goods from the Philippines will be Page 6armed with cannon and other means of defense....