The Philadelphia Magazines and their Contributors 1741-1850 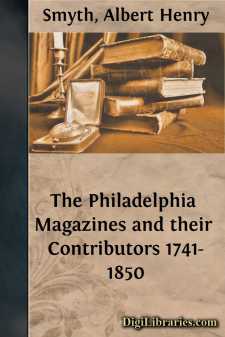 To relate the history of the Philadelphia magazines is to tell the story of Philadelphia literature. The story is not a stately nor a splendid one, but it is exceedingly instructive. It helps to exhibit the process of American literature as an evolution, and it illustrates perilous and important chapters in American history. For a hundred years Pennsylvania was the seat of the ripest culture in America. The best libraries were to be found here, and the earliest and choicest reprints of Latin and English classics were made here. James Logan, a man of gentle nature and a scholar of rare attainments, had gathered at Stenton a library that comprehended books "so scarce that neither price nor prayers could purchase them." John Davis, the satirical English traveller, who said of Princeton that it was "a place more famous for its college than its learning," did justice, despite of his own nature, to Logan and to Philadelphia when he wrote: "The Greek and Roman authors, forgotten on their native banks of the Ilissus and Tiber, delight by the kindness of a Logan the votaries to learning on those of the Delaware." The eagerness of Philadelphia social circles for each new thing in literature enabled booksellers to import large supplies from England and to undertake splendid editions of notable books. Dr. Johnson was made to feel amiable for a moment toward America on being presented with a copy of Rasselas bearing a Philadelphia imprint.

The first American editions of Shakespeare and of Milton, of "Pamela" and of "The Vicar of Wakefield" were printed in Philadelphia. In the same city, in 1805, Aristotle's "Ethics" and "Politics" were published for the first time in America. A little later came the costly "Columbiad" and the great volumes of Alexander Wilson. Robert Aitken, at the Pope's Head, issued the first English Bible in America in 1782, and his daughter, Jane, printed Charles Thomson's translation of the Septuagint in four superb volumes in 1808. Robert Bell successfully compiled Blackstone's Commentaries in 1772, "a stupendous enterprise." Bell did much by his good taste and untiring industry to advance the literary culture of the city. "The more books are sold," he declared in one of his broadsides, "the more will be sold, is an established Truth well known to every liberal reader, and to every bookseller of experience. For the sale of one book propagateth the sale of another with as much certainty as the possession of one guinea helpeth to the possession of another."

"The Philadelphiad" (1784) gives us a glimpse of the motley society that loitered in Bell's Third Street shop.

"Just by St. Paul's, where dry divines rehearse,Bell keeps his store for vending prose and verse,And books that's neither—for no age nor clime,Lame, languid prose, begot on hobb'ling ryme.Here authors meet who ne'er a sprig have got,The poet, player, doctor, wit and sot;Smart politicians wrangling here are seenCondemning Jeffries or indulging spleen,Reproving Congress or amending laws,Still fond to find out blemishes and flaws;Here harmless sentimental-mongers joinTo praise some author or his wit refine,Or treat the mental appetite with loreFrom Plato's, Pope's, and Shakespeare's endless store;Young blushing writers, eager for the bays,Try here the merit of their new-born lays,Seek for a patron, follow fleeting fame,And beg the slut may raise their hidden name."

The Philadelphia magazines, from Franklin's to Graham's, furnished ample opportunities for "young blushing writers eager for the bays." Their articles, it is true, were often a kind of yeasty collection of fond and winnowed opinions, but among these shallow fopperies there would at times be heard a strain of higher mood. Nor is the story of these magazines altogether without its pathos. American writers, after the Revolution which lost England her colonies, felt themselves to be under the opprobrium of the literary world. They felt keenly the sneers of English men-of-letters, and winced under injustice and invective that they were not strong enough to resent....