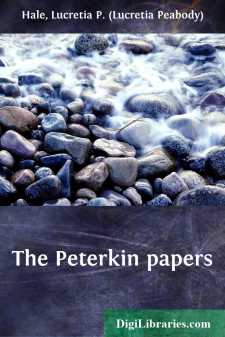 THE first of these stories was accepted by Mr. Howard M. Ticknor for the "Young Folks." They were afterwards continued in numbers of the "St. Nicholas."

A second edition is now printed, containing a new paper, which has never before been published, "The Peterkins at the Farm."

It may be remembered that the Peterkins originally hesitated about publishing their Family Papers, and were decided by referring the matter to the lady from Philadelphia. A little uncertain of whether she might happen to be at Philadelphia, they determined to write and ask her.

Solomon John suggested a postal-card. Everybody reads a postal, and everybody would read it as it came along, and see its importance, and help it on. If the lady from Philadelphia were away, her family and all her servants would read it, and send it after her, for answer.

Elizabeth Eliza thought the postal a bright idea. It would not take so long to write as a letter, and would not be so expensive. But could they get the whole subject on a postal?

Mr. Peterkin believed there could be no difficulty, there was but one question:—

Shall the adventures of the Peterkin family be published?

This was decided upon, and there was room for each of the family to sign, the little boys contenting themselves with rough sketches of their india-rubber boots.

Mr. Peterkin, Agamemnon, and Solomon John took the postal-card to the post-office early one morning, and by the afternoon of that very day, and all the next day, and for many days, came streaming in answers on postals and on letters. Their card had been addressed to the lady from Philadelphia, with the number of her street. But it must have been read by their neighbors in their own town post-office before leaving; it must have been read along its way: for by each mail came piles of postals and letters from town after town, in answer to the question, and all in the same tone: "Yes, yes; publish the adventures of the Peterkin family."

"Publish them, of course."

And in time came the answer of the lady from Philadelphia:—"Yes, of course; publish them."

This is why they were published.

THE LADY WHO PUT SALT IN HER COFFEE.

THIS was Mrs. Peterkin. It was a mistake. She had poured out a delicious cup of coffee, and, just as she was helping herself to cream, she found she had put in salt instead of sugar! It tasted bad. What should she do? Of course she couldn't drink the coffee; so she called in the family, for she was sitting at a late breakfast all alone. The family came in; they all tasted, and looked, and wondered what should be done, and all sat down to think.

At last Agamemnon, who had been to college, said, "Why don't we go over and ask the advice of the chemist?" (For the chemist lived over the way, and was a very wise man.) Mrs. Peterkin said, "Yes," and Mr. Peterkin said, "Very well," and all the children said they would go too. So the little boys put on their india-rubber boots, and over they went.

Now the chemist was just trying to find out something which should turn everything it touched into gold; and he had a large glass bottle into which he put all kinds of gold and silver, and many other valuable things, and melted them all up over the fire, till he had almost found what he wanted....