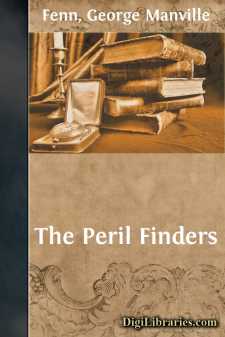 Chapter One. The Western Paradise.

“Well, boys, where have you been?”

The speaker, a sturdy-looking, sun-tanned man, seated upon a home-made stool at a rough home-made table in a home-made house of rugged, coarsely-sawn boards, with an open roof covered in with what one of the boys had called wooden slates, had looked up from his writing, and as he spoke carefully wiped his pen—for pens were scarce—and corked the little stone bottle of ink so that it should not evaporate in the super-heated atmosphere, before it was wanted again for the writing of one of the rare letters dispatched to England, these being few, the writer preferring to wait till the much-talked-of better days came—the days for which they had been patiently waiting five years.

The boys looked sharply one at the other, their eyes seeming to say, “You tell him!” But neither of them spoke, and the penman said sharply—

“Hallo! Been in some mischief?”

The boys spoke out together then, and muddled or blurred their reply, for one said, “No, fa,” being his shortening of father, and the other cried, “No, sir,” both looking indignant at the suggestion. “What have you been doing, then?”

“Good lads!” cried the first speaker, leaning back on his seat, and starting up and grasping the rough edge of the table to save himself from falling, while the boys burst out laughing.

“Yes, you may laugh, my fine fellows,” said the first speaker rather pettishly, “but it wouldn’t have been pleasant for me if I had gone down.”

“No, fa,” said his son, colouring and speaking quickly. “I beg your pardon! I am sorry.”

“I know, Chris. You didn’t think. I suppose it looked droll.”

“Yes, sir,” said the other boy, hastily. “I beg your pardon too. You thought you were in an arm-chair, didn’t you?”

“I did, my boy,” was the reply, given in company with a weary sigh. “But granted, granted, and thank you. I’m glad to find that though we are leading this half savage life, you young fellows don’t forget that you are gentlemen.”

“Same thing, Ned Bourne. Well, so we’re to have a treat: fish for dinner, eh? Where are they?”

The boys exchanged glances again, their eyes twinkling with mirth, and then they burst out laughing merrily once more.

“A big basketful, boys?” And the speaker rubbed his hands.

“Then why didn’t you try the river?”

“No, fa; it was all turned into pools when we were there a fortnight ago, and now there’s only a muddy spot here and there; all the rest have dried-up.”

“Oh, it will be better soon, sir,” said the second boy cheerfully. “There’ll be a heavy rain, the river will fill again, and the fish begin running up from the sea....