The People That Time Forgot 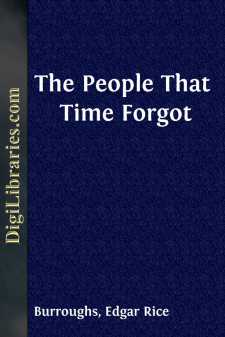 I am forced to admit that even though I had traveled a long distance to place Bowen Tyler's manuscript in the hands of his father, I was still a trifle skeptical as to its sincerity, since I could not but recall that it had not been many years since Bowen had been one of the most notorious practical jokers of his alma mater. The truth was that as I sat in the Tyler library at Santa Monica I commenced to feel a trifle foolish and to wish that I had merely forwarded the manuscript by express instead of bearing it personally, for I confess that I do not enjoy being laughed at. I have a well-developed sense of humor—when the joke is not on me.

Mr. Tyler, Sr., was expected almost hourly. The last steamer in from Honolulu had brought information of the date of the expected sailing of his yacht Toreador, which was now twenty-four hours overdue. Mr. Tyler's assistant secretary, who had been left at home, assured me that there was no doubt but that the Toreador had sailed as promised, since he knew his employer well enough to be positive that nothing short of an act of God would prevent his doing what he had planned to do. I was also aware of the fact that the sending apparatus of the Toreador's wireless equipment was sealed, and that it would only be used in event of dire necessity. There was, therefore, nothing to do but wait, and we waited.

We discussed the manuscript and hazarded guesses concerning it and the strange events it narrated. The torpedoing of the liner upon which Bowen J. Tyler, Jr., had taken passage for France to join the American Ambulance was a well-known fact, and I had further substantiated by wire to the New York office of the owners, that a Miss La Rue had been booked for passage. Further, neither she nor Bowen had been mentioned among the list of survivors; nor had the body of either of them been recovered.

Their rescue by the English tug was entirely probable; the capture of the enemy U-33 by the tug's crew was not beyond the range of possibility; and their adventures during the perilous cruise which the treachery and deceit of Benson extended until they found themselves in the waters of the far South Pacific with depleted stores and poisoned water-casks, while bordering upon the fantastic, appeared logical enough as narrated, event by event, in the manuscript.

Caprona has always been considered a more or less mythical land, though it is vouched for by an eminent navigator of the eighteenth century; but Bowen's narrative made it seem very real, however many miles of trackless ocean lay between us and it. Yes, the narrative had us guessing. We were agreed that it was most improbable; but neither of us could say that anything which it contained was beyond the range of possibility. The weird flora and fauna of Caspak were as possible under the thick, warm atmospheric conditions of the super-heated crater as they were in the Mesozoic era under almost exactly similar conditions, which were then probably world-wide. The assistant secretary had heard of Caproni and his discoveries, but admitted that he never had taken much stock in the one nor the other....