The Pennyles Pilgrimage Or The Money-lesse Perambulation of John Taylor 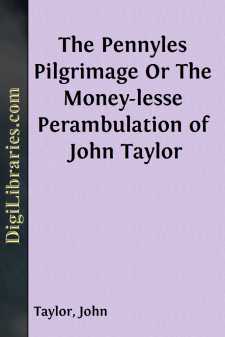 eader, these Travels of mine into Scotland, were not undertaken, neither in imitation, or emulation of any man, but only devised by myself, on purpose to make trial of my friends both in this Kingdom of England, and that of Scotland, and because I would be an eye-witness of divers things which I had heard of that Country; and whereas many shallow-brained Critics, do lay an aspersion on me, that I was set on by others, or that I did undergo this project, either in malice, or mockage of Master Benjamin Jonson, I vow by the faith of a Christian, that their imaginations are all wide, for he is a gentleman, to whom I am so much obliged for many undeserved courtesies that I have received from him, and from others by his favour, that I durst never to be so impudent or ungrateful, as either to suffer any man's persuasions, or mine own instigation, to incite me, to make so bad a requital, for so much goodness formerly received; so much for that, and now Reader, if you expect

That I should write of cities' situations,Or that of countries I should make relations:Of brooks, crooks, nooks; of rivers, bournes and rills,Of mountains, fountains, castles, towers and hills,Of shires, and piers, and memorable things,Of lives and deaths of great commanding kings,I touch not those, they not belong to me;But if such things as these you long to see,Lay down my book, and but vouchsafe to readThe learned Camden, or laborious Speed.

And so God speed you and me, whilst I rest

Yours in all thankfulness:

ist Lordlings, list (if you have lust to list)I write not here a tale of had I wist:But you shall hear of travels, and relations,Descriptions of strange (yet English) fashions.And he that not believes what here is writ,Let him (as I have done) make proof of it.The year of grace, accounted (as I ween)One thousand twice three hundred and eighteen,And to relate all things in order duly,'Twas Tuesday last, the fourteenth day of July,Saint Revels day, the almanack will tell yeThe sign in Virgo was, or near the belly:The moon full three days old, the wind full south;At these times I began this trick of youth.I speak not of the tide, for understand,My legs I made my oars, and rowed by land,Though in the morning I began to goGood fellows trooping, flocked me so,That make what haste I could, the sun was set,E're from the gates of London I could get.At last I took my latest leave thus late,At the Bell Inn, that's extra Aldersgate.There stood a horse that my provant should carry,From that place to the end of my fegary,My horse no horse, or mare, but gelded nag,That with good understanding bore my bag:And of good carriage he himself did show,These things are excellent in a beast you know.There in my knapsack, (to pay hunger's fees)I had good bacon, biscuit, neat's-tongue, cheeseWith roses, barberries, of each conserves,And mithridate, that vigorous health perserves:And I entreat you take these words for no-lies,I had good Aqua vitæ, Rosa so-lies:With sweet Ambrosia, (the gods' own drink)Most excellent gear for mortals, as I think,Besides, I had both vinegar and oil,That could a daring saucy stomach foil....