The Penang Pirate and, The Lost Pinnace 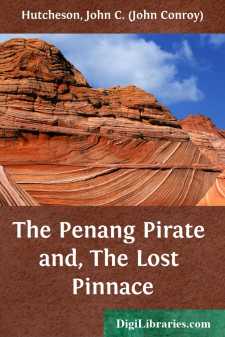 In the Pearl River.

“’Cause I can’t make out why we are wasting our time here, with the cargo all aboard and the wind fair.”

“Don’t you fret yourself about that, Jem Backstay. The skipper knows what he’s a-doing, and has got a heap o’ ’sponsibility on them shoulders o’ his’n—a fine ship and a valuable cargo to get home safe to old h’England with a short crew, and a lot o’ murderin’, blood-suckin’ pirates all over the h’Indian seas!”

“Ay, pirates! I spoke plain enough, didn’t I? But you needn’t shiver in your skin like one of them white-livered Lascars we’ve got aboard in place of honest sailors, worse luck! You needn’t have no cause to fear for the number o’ your mess, bo; the cap’en—God bless him!—will see us safe through, you may be sure.”

“Right you are, Bill; you know the old man better nor I, and I s’pose he’s taking cautions like?”

“No fear, mate. He’s got his head screwed on right enough, my bo.”

“And that’s the reason, p’raps, he’d that long palaver with the admiral’s flagship afore we come up the river?”

“Well, Bill, if so be there’s pirates about, they might do a’most as they likes wi’ us, for I don’t think there are three cutlasses aboard, and ne’er a musket as I can see, and only powder enough to fire off that little popgun there to summons a pilot.”

“Aye,” answered the other nonchalantly.

The Hankow Lin was lying in the Pearl River, off Whampoa, some twelve miles below Canton, to which anchorage all sailing vessels having business at this port of the Celestial Empire are restricted by the mandarins, only steamers being permitted to ascend the reaches of the river to the city proper and anchor in front of Shah Mien, the English settlement.

The vessel had shipped all her tea and silk, which formed a valuable cargo; and, with her anchor hove short, so that she seemed to ride just over it, and her topsails loose all handy to let fall and sheet home, she appeared ready to start at a moment’s notice on her homeward voyage—down the ugly Canton River and across the pathless Indian seas and the miles of weary ocean journey that lay between her and her final destination, “the tight little island,” with its now historical “streak of silver sea,” supposed to guard it from Continental invasion.

What delayed the Hankow Lin?

Ah! her captain could tell perhaps, for it might be taken for granted that there was some urgent reason for his remaining here with no possible object to gain when his cargo was stowed and the ship homeward-bound. The seamen could make nothing of it, however; and there was much grumbling forwards at this unlooked-for hitch in their departure from the land of “chin chins” and “no bony Johnny.”

Jem Backstay, who was a stalwart, able-bodied seaman, and as smart a “hand” as could be found in a day’s cruise, did not appear at all convinced by what his chum Bill, the boatswain, had said, for he returned again to the conversation after the latter had apparently ended it with his monosyllabic “aye.”

“Lor’, mate!” said he, “I thinks your old brains are wool-gathering about pirates....