The Pearl of the Antilles, or An Artist in Cuba 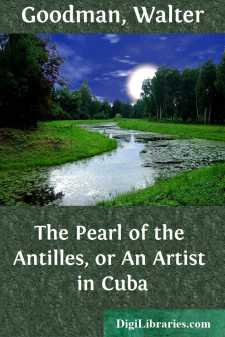 My companion and brother-artist, Nicasio Rodriguez y Boldú, is a native of Cuba, and as he has signified his intention to visit his birthplace in the West Indies, we bid 'addio' to fair Florence, where for three years we have dwelt together and followed our profession, and, embarking in a French steamer at St. Nazaire, we set sail for the Pearl of the Antilles.

Our official reception at Santiago de Cuba is far from cordial. Before we land, the Spanish authorities meet us on board, and, after a careful inspection of our passports, present each of us with what they call a 'permit of disembarcation,' for which we have to pay sixteen reales 'fuertes.' Having, so to speak, purchased 'tickets of admission' to the Spanish colony, and having also deposited our luggage in the 'cloak-room' of the establishment—which in this instance is represented by a custom-house—we naturally expect to be favoured with a 'bill' of tropical performances. No such bill is, however, presented to us; but as a substitute, we obtain full particulars by application, within a month after our arrival, to the chief of police. From this functionary we learn that our 'tickets of admission' are available only for one quarter's sojourn in the island, and that if we desire to remain for a longer period, an official 'season-ticket' must be procured. The authorised programme of the 'Loyal and Ever-faithful Isle' is divided into a great many Acts. One of these acts announces that 'no foreigner is allowed to reside more than three months in the island without procuring first a carta de domicilio (habitation license), which he may obtain by a petition supported by the consul of his nation.' The carta de domicilio will enable the foreigner in question to dwell unmolested in this strangely governed country for a period not exceeding five years; but he may not leave the island, neither may he remove to another town, without a pass from a Capitan de Partido, a Celador, or some such official.

The chief of police moreover tells us that, conformably with another act or article in his code, the 'applicant' must represent himself as a Catholic; that he must take the oaths of fidelity and vassalage before the governor, and that within the prescribed five years 'a foreigner must be either naturalised, or he must leave the country.'

Yet another act proclaims that during the first five years of his residence, 'the said foreigner may not carry on nor may he possess a shop, a warehouse, or become a captain of a vessel. He may, however, have a share in a company or firm of Spaniards.'

But the strangest mandate of all is that which denies to 'any inhabitant whatsoever' the privilege of moving from one house to another 'without giving notice of such removal to the chief of police!'

Thus much for our welcome by the authorities of Cuba!

The Cubans themselves are, however, more obsequious. Long before we have anchored in the Cuban bay, the news of our arrival has reached the ears of my companion's friends, who hasten to greet us from little canoes with white awnings to ward off the rays of the scorching sun....