The Peace of Roaring River 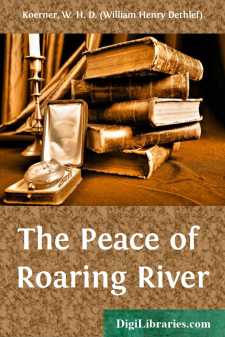 To the village of Carcajou came a young man in the spring. The last patches of snow were disappearing from under the protecting fronds of trees bursting into new leaf. From the surface of the lakes the heavy ice had melted and broken, and still lay in shattered piles on the lee shores. Black-headed chickadees, a robin or two, and finally swallows had appeared, following the wedges of geese returning from the south on their way to the great weedy shoals of James’ Bay.

The young man had brought with him a couple of heavy packs and some tools, but this did not suffice. He entered McGurn’s store, after hesitating between the Hudson’s Bay Post and the newer building. A newcomer he was, and something of a tenderfoot, but he made no pretence of knowing it all. A gigantic Swede he addressed gave him valued advice, and Sophy McGurn, daughter of the proprietor, joined in, smilingly.

She was a rather striking girl, of fiery locks and, it was commonly reported, of no less flaming temper. To Hugo Ennis, however, she showed the most engaging traits she possessed. The youth was good-looking, well built, and his attire showed the merest trifle of care, such as the men of Carcajou were unused to bestow upon their garb. The bill finally made out by Sophia amounted to some seventy dollars.

“Come again, always glad to see you,” called the young lady as Hugo marched out, bearing a part of his purchases.

For a month he disappeared in the wilderness and finally turned up again, for a few more purchases. On the next day he left once more with Stefan, the big Swede, and nothing of the two was seen again until August, when they returned very ragged, looking hungry, their faces burned to a dull brick color, their limbs lankier and, if anything, stronger than ever. The two sat on the verandah of the store and Hugo counted out money his companion had earned as guide and helper. When they entered the store Miss Sophia smiled again, graciously, and nodded a head adorned with a bit of new ribbon. There were a few letters waiting for Hugo, which she handed out, as McGurn’s store was also the local post-office. The young man chatted with her for some time. It was pleasant to be among people again, to hear a voice that was not the gruff speech of Stefan, given out in a powerful bass.

“More as two months ve traipse all ofer,” volunteered the latter. “Ye-es, Miss Sophy, ma’am, ve vork youst like niggers. Und it’s only ven ve gets back real handy here, by de pig Falls, dat ve strike someting vhat look mighty good. Hugo here he build a good log-shack. He got de claim all fix an’ vork on it some to vintertime. Nex spring he say he get a gang going. Vants me for foreman, he do.”

This was pleasant news. Hugo would be a neighbor, for what are a dozen miles or so in the wilderness? He would be coming back and forth for provisions, for dynamite, for anything he needed.

“We had a fine trip anyway, and saw a lot of country,” declared Hugo, cheerfully.

“Ve get one big canoe upset in country close in by Gowganda,” said Stefan again....