The Peace Negotiations A Personal Narrative 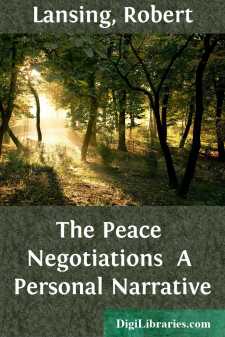 CHAPTER I REASONS FOR WRITING A PERSONAL NARRATIVE

"While we were still in Paris, I felt, and have felt increasingly ever since, that you accepted my guidance and direction on questions with regard to which I had to instruct you only with increasing reluctanceвЂ¦.

"вЂ¦ I must say that it would relieve me of embarrassment, Mr. Secretary, the embarrassment of feeling your reluctance and divergence of judgment, if you would give your present office up and afford me an opportunity to select some one whose mind would more willingly go along with mine."

These words are taken from the letter which President Wilson wrote to me on February 11, 1920. On the following day I tendered my resignation as Secretary of State by a letter, in which I said:

"Ever since January, 1919, I have been conscious of the fact that you no longer were disposed to welcome my advice in matters pertaining to the negotiations in Paris, to our foreign service, or to international affairs in general. Holding these views I would, if I had consulted my personal inclination alone, have resigned as Secretary of State and as a Commissioner to Negotiate Peace. I felt, however, that such a step might have been misinterpreted both at home and abroad, and that it was my duty to cause you no embarrassment in carrying forward the great task in which you were then engaged."

The President was right in his impression that, "while we were still in Paris," I had accepted his guidance and direction with reluctance. It was as correct as my statement that, as early as January, 1919, I was conscious that he was no longer disposed to welcome my advice in matters pertaining to the peace negotiations at Paris.

There have been obvious reasons of propriety for my silence until now as to the divergence of judgment, the differences of opinion and the consequent breach in the relations between President Wilson and myself. They have been the subject of speculation and inference which have left uncertain the true record. The time has come when a frank account of our differences can be given publicity without a charge being made of disloyalty to the Administration in power.

The President, in his letter of February 11, 1920, from which the quotation is made, indicated my unwillingness to follow him in the course which he adopted at Paris, but he does not specifically point out the particular subjects as to which we were not in accord. It is unsatisfactory, if not criticizable, to leave the American people in doubt as to a disagreement between two of their official representatives upon a matter of so grave importance to the country as the negotiation of the Treaty of Versailles. They are entitled to know the truth in order that they may pass judgment upon the merits of the differences which existed. I am not willing that the present uncertainty as to the facts should continue. Possibly some may think that I have remained silent too long. If I have, it has been only from a sense of obligation to an Administration of which I was so long a member....