The Peace Egg and Other tales 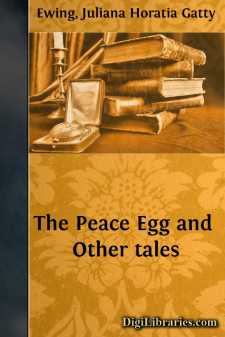 THE PEACE EGG. A CHRISTMAS TALE.

Every one ought to be happy at Christmas. But there are many things which ought to be, and yet are not; and people are sometimes sad even in the Christmas holidays.

The Captain and his wife were sad, though it was Christmas Eve. Sad, though they were in the prime of life, blessed with good health, devoted to each other and to their children, with competent means, a comfortable house on a little freehold property of their own, and, one might say, everything that heart could desire. Sad, though they were good people, whose peace of mind had a firmer foundation than their earthly goods alone; contented people, too, with plenty of occupation for mind and body. Sad—and in the nursery this was held to be past all reason—though the children were performing that ancient and most entertaining Play or Christmas Mystery of Good St. George of England, known as The Peace Egg, for their benefit and behoof alone.

The play was none the worse that most of the actors were too young to learn parts, so that there was very little of the rather tedious dialogue, only plenty of dress and ribbons, and of fighting with the wooden swords. But though St. George looked bonny enough to warm any father's heart, as he marched up and down with an air learned by watching many a parade in barrack-square and drill-ground, and though the Valiant Slasher did not cry in spite of falling hard and the Doctor treading accidentally on his little finger in picking him up, still the Captain and his wife sighed nearly as often as they smiled, and the mother dropped tears as well as pennies into the cap which the King of Egypt brought round after the performance.

Many many years back the Captain's wife had been a child herself, and had laughed to see the village mummers act the Peace Egg, and had been quite happy on Christmas Eve. Happy, though she had no mother. Happy, though her father was a stern man, very fond of his only child, but with an obstinate will that not even she dared thwart. She had lived to thwart it, and he had never forgiven her. It was when she married the Captain. The old man had a prejudice against soldiers, which was quite reason enough, in his opinion, for his daughter to sacrifice the happiness of her future life by giving up the soldier she loved. At last he gave her her choice between the Captain and his own favour and money. She chose the Captain, and was disowned and disinherited.

The Captain bore a high character, and was a good and clever officer, but that went for nothing against the old man's whim. He made a very good husband too; but even this did not move his father-in-law, who had never held any intercourse with him or his wife since the day of their marriage, and who had never seen his own grandchildren. Though not so bitterly prejudiced as the old father, the Captain's wife's friends had their doubts about the marriage. The place was not a military station, and they were quiet country folk who knew very little about soldiers, whilst what they imagined was not altogether favourable to "red-coats" as they called them. Soldiers are well-looking generally, it is true (and the Captain was more than well-looking—he was handsome); brave, of course it is their business (and the Captain had V.C. after his name and several bits of ribbon on his patrol jacket). But then, thought the good people, they are here to-day and gone to-morrow, you "never know where you have them"; they are probably in debt, possibly married to several women in several foreign countries, and, though they are very courteous in society, who knows how they treat their wives when they drag them off from their natural friends and protectors to distant lands where no one can call them to account?

"Ah, poor thing!" said Mrs. John Bull, junior, as she took off her husband's coat on his return from business, a week after the Captain's wedding, "I wonder how she feels?...