The Paths of Inland Commerce; a chronicle of trail, road, and waterway 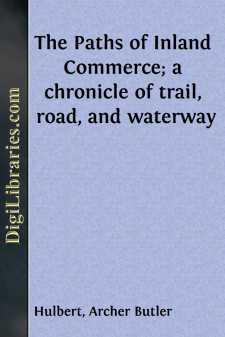 CHAPTER I. The Man Who Caught The Vision

Inland America, at the birth of the Republic, was as great a mystery to the average dweller on the Atlantic seaboard as the elephant was to the blind men of Hindustan. The reports of those who had penetrated this wilderness—of those who had seen the barren ranges of the Alleghanies, the fertile uplands of the Unakas, the luxuriant blue-grass regions, the rich bottom lands of the Ohio and Mississippi, the wide shores of the inland seas, or the stretches of prairie increasing in width beyond the Wabash—seemed strangely contradictory, and no one had been able to patch these reports together and grasp the real proportions of the giant inland empire that had become a part of the United States. It was a pathless desert; it was a maze of trails, trodden out by deer, buffalo, and Indian. Its great riverways were broad avenues for voyagers and explorers; they were treacherous gorges filled with the plunder of a million floods. It was a rich soil, a land of plenty; the natives were seldom more than a day removed from starvation. Within its broad confines could dwell a great people; but it was as inaccessible as the interior of China. It had a great commercial future; yet its gigantic distances and natural obstructions defied all known means of transportation.

Such were the varied and contradictory stories told by the men who had entered the portals of inland America. It is not surprising, therefore, that theories and prophecies about the interior were vague and conflicting nor that most of the schemes of statesmen and financiers for the development of the West were all parts and no whole. They all agreed as to the vast richness of that inland realm and took for granted an immense commerce therein that was certain to yield enormous profits. In faraway Paris, the ingenious diplomat, Silas Deane, writing to the Secret Committee of Congress in 1776, pictured the Old Northwest—bounded by the Ohio, the Alleghanies, the Great Lakes, and the Mississippi—as paying the whole expense of the Revolutionary War. * Thomas Paine in 1780 drew specifications for a State of from twenty to thirty millions of acres lying west of Virginia and south of the Ohio River, the sale of which land would pay the cost of three years of the war. ** On the other hand, Pelatiah Webster, patriotic economist that he was, decried in 1781 all schemes to "pawn" this vast westward region; he likened such plans to "killing the goose that laid an egg every day, in order to tear out at once all that was in her belly." He advocated the township system of compact and regular settlement; and he argued that any State making a cession of land would reap great benefit "from the produce and trade" of the newly created settlements.

* Deane's plan was to grant a tract two hundred miles square atthe junction of the Ohio and the Mississippi to a company on thecondition that a thousand families should be settled on it withinseven years. He added that, as this company would be in a great degreecommercial, the establishing of commerce at the junction of those largerivers would immediately give a value to all the lands situated on ornear them....
Show more
Show less