The Path of Empire; a chronicle of the United States as a world power 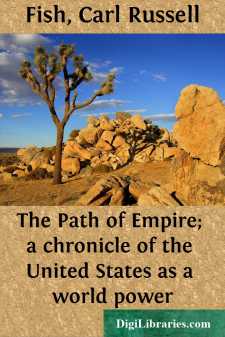 CHAPTER I. The Monroe Doctrine

In 1815 the world found peace after twenty-two years of continual war. In the forests of Canada and the pampas of South America, throughout all the countries of Europe, over the plains of Russia and the hills of Palestine, men and women had known what war was and had prayed that its horrors might never return. In even the most autocratic states subjects and rulers were for once of one mind: in the future war must be prevented. To secure peace forever was the earnest desire of two statesmen so strongly contrasted as the impressionable Czar Alexander I of Russia, acclaimed as the "White Angel" and the "Universal Savior," and Prince Metternich, the real ruler of Austria, the spider who was for the next thirty years to spin the web of European secret diplomacy. While the Czar invited all governments to unite in a "Holy Alliance" to prevent war, Metternich for the same purpose formed the less holy but more powerful "Quadruple Alliance" of Russia, Prussia, Austria, and England.

The designs of Metternich, however, went far beyond the mere prevention of war. To his mind the cause of all the upheavals which had convulsed Europe was the spirit of liberty bred in France in the days of the Revolution; if order was to be restored, there must be a return to the former autocratic principle of government, to the doctrine of "Divine Right"; it was for kings and emperors to command; it was the duty of subjects to obey. These principles had not, it was true, preserved peace in the past, but Metternich now proposed that, in the future, sovereigns or their representatives should meet "at fixed periods" to adjust their own differences and to assist one another in enforcing the obedience of subjects everywhere. The rulers were reasonably well satisfied with the world as it was arranged by the Congress of Vienna in 1815 and determined to set their faces against any change in the relations of governments to one another or to their subjects. They regretted, indeed, that the Government of the United States was built upon the sands of a popular vote, but they recognized that it was apparently well established and decently respectable, and therefore worthy of recognition by the mutual protection society of the Holy Alliance.

The subjects of these sovereigns, however, did not all share the satisfaction of their masters, and some of them soon showed that much as they desired peace they desired other things even more. The inhabitants of Spanish America, while their imperial mother was in the chaos of Napoleon's wars, had nibbled at the forbidden fruit of freedom. They particularly desired freedom to buy the products of British factories, which cost less and satisfied better than those previously furnished by the Spanish merchants, secure in their absolute monopoly. With peace came renewed monopoly, haughty officials, and oppressive laws dictated by that most stupid of the restored sovereigns, Ferdinand VII of Spain. Buenos Aires, however, never recognized his rule, and her general, the knightly San Martin, in one of the most remarkable campaigns of history, scaled the Andes and carried the flag of revolution into Chili and Peru....