The Passing of the Frontier; a chronicle of the old West 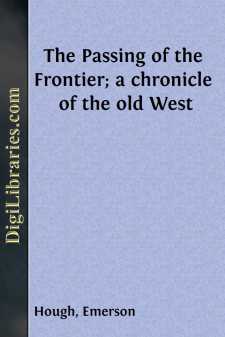 Chapter I. The Frontier In History

The frontier! There is no word in the English language more stirring, more intimate, or more beloved. It has in it all the elan of the old French phrase, En avant! It carries all of the old Saxon command, Forward!! It means all that America ever meant. It means the old hope of a real personal liberty, and yet a real human advance in character and achievement. To a genuine American it is the dearest word in all the world.

What is, or was, the frontier? Where was it? Under what stars did it lie? Because, as the vague Iliads of ancient heroes or the nebulous records of the savage gentlemen of the Middle Ages make small specific impingement on our consciousness today, so also even now begin the tales of our own old frontier to assume a haziness, an unreality, which makes them seem less history than folklore. Now the truth is that the American frontier of history has many a local habitation and many a name. And this is why it lies somewhat indefinite under the blue haze of the years, all the more alluring for its lack of definition, like some old mountain range, the softer and more beautiful for its own shadows.

The fascination of the frontier is and has ever been an undying thing. Adventure is the meat of the strong men who have built the world for those more timid. Adventure and the frontier are one and inseparable. They suggest strength, courage, hardihood—qualities beloved in men since the world began—qualities which are the very soul of the United States, itself an experiment, an adventure, a risk accepted. Take away all our history of political regimes, the story of the rise and fall of this or that partisan aggregation in our government; take away our somewhat inglorious military past; but leave us forever the tradition of the American frontier! There lies our comfort and our pride. There we never have failed. There, indeed, we always realized our ambitions. There, indeed, we were efficient, before that hateful phrase was known. There we were a melting-pot for character, before we came to know that odious appellation which classifies us as the melting-pot of the nations.

The frontier was the place and the time of the strong man, of the self-sufficient but restless individual. It was the home of the rebel, the protestant, the unreconciled, the intolerant, the ardent—and the resolute. It was not the conservative and tender man who made our history; it was the man sometimes illiterate, oftentimes uncultured, the man of coarse garb and rude weapons. But the frontiersmen were the true dreamers of the nation. They really were the possessors of a national vision. Not statesmen but riflemen and riders made America. The noblest conclusions of American history still rest upon premises which they laid.

But, in its broadest significance, the frontier knows no country. It lies also in other lands and in other times than our own. When and what was the Great Frontier? We need go back only to the time of Drake and the sea-dogs, the Elizabethan Age, when all North America was a frontier, almost wholly unknown, compellingly alluring to all bold men....