The Passing of New France : a Chronicle of Montcalm 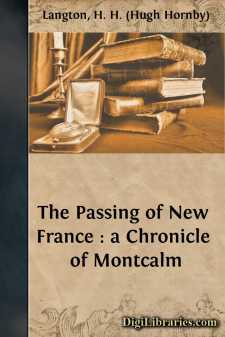 'War is the grave of the Montcalms.' No one can tell how old this famous saying is. Perhaps it is as old as France herself. Certainly there never was a time when the men of the great family of Montcalm-Gozon were not ready to fight for their king and country; and so Montcalm, like Wolfe, was a soldier born.

Even in the Crusades his ancestors were famous all over Europe. When the Christians of those brave days were trying to drive the unbelievers out of Palestine they gladly followed leaders whom they thought saintly and heroic enough to be their champions against the dragons of sultan, satan, and hell; for people then believed that dragons fought on the devil's side, and that only Christian knights, like St George, fighting on God's side, could kill them. The Christians banded themselves together in many ways, among others in the Order of the Knights of St John of Jerusalem, taking an oath to be faithful unto death. They chose the best man among them to be their Grand Master; and so it could have been only after much devoted service that Deodat de Gozon became Grand Master, more than five hundred years ago, and was granted the right of bearing the conquered Dragon of Rhodes on the family coat of arms, where it is still to be seen. How often this glorious badge of victory reminded our own Montcalm of noble deeds and noble men! How often it nerved him to uphold the family tradition!

There are centuries of change between Crusaders and Canadians. Yet the Montcalms can bridge them with their honour. And, among all the Montcalms who made their name mean soldier's honour in Eastern or European war, none have given it so high a place in the world's history as the hero whose life and death in Canada made it immortal. He won the supreme glory for his name, a glory so bright that it shone even through the dust of death which shrouded the France of the Revolution. In 1790, when the National Assembly was suppressing pensions granted by the Crown, it made a special exception in favour of Montcalm's children. As kings, marquises, heirs, and pensions were among the things the Revolution hated most, it is a notable tribute to our Marquis of Montcalm that the revolutionary parliament should have paid to his heirs the pension granted by a king. Nor has another century of change in France blotted out his name and fame. The Montcalm was the French flagship at the naval review held in honour of the coronation of King Edward VII. The Montcalm took the President of France to greet his ally the Czar of Russia. And, but for a call of duty elsewhere at the time, the Montcalm would have flown the French admiral's flag in 1908, at the celebration of the Tercentenary of the founding of Quebec, when King George V led the French- and English-speaking peoples of the world in doing honour to the twin renown of Wolfe and Montcalm on the field where they won equal glory, though unequal fortune.

Montcalm was a leap-year baby, having been born on February 29, 1712, in the family castle of Candiac, near Nimes, a very old city of the south of France, a city with many forts built by the Romans two thousand years ago....