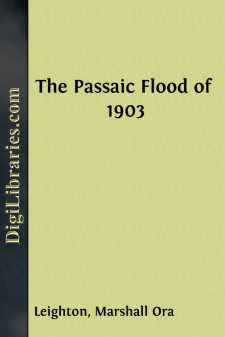 In the following pages is given a brief history of the disastrous flood which occurred in the Passaic River Basin in October, 1903. In the report by George Buell Hollister and the writer, entitled "The Passaic Flood of 1902," and published by the United States Geological Survey as Water-Supply and Irrigation Paper No. 88, are discussed the principal physiographic features of the drainage basin and their general relations to the stream flow. This report will not repeat this information, and the discussion will be confined to the flood itself. References to local features will be made without explanation, the presumption being that this publication shall accompany the earlier one and be, as it is, a continuation of it. In the present report more attention is given to an estimate of damages than in the earlier work, and remedies by which devastation may be avoided are briefly considered.

Passaic River overflowed its banks on October 8, 1903, and remained in flood until October 19. Between these dates there occurred the greatest and most destructive flood ever known along this stream. Ordinarily the channel of the lower Passaic at full bank carries about 12,000 cubic feet of water per second, but at the height of this flood it carried about 35,700 cubic feet per second.

The flood period for the entire stream can not be exactly stated, as the overflow did not occur at the same time in different parts of the basin. For example, the gage-height records at Dundee dam show that the flood began to rise on October 8 at 6.30 a. m., and reached a maximum of 9-1/2 inches over the dam crest at 9 p. m. on October 10. Similarly, on Beattie's dam at Little Falls the flood began to rise at midnight on October 7, and reached its maximum at 2 p. m. on October 10, or about thirty-eight hours after the initial rise, the height of the water being 1.29 inches over the crest of the dam.

The flood rose on the highland tributaries as follows: On Ramapo River the flood crest passed Hillborn at about 10 a. m. on October 9 and reached Pompton, at the mouth of the river, shortly after noon of the same day.

The highest reading recorded on the Geological Survey gage at the feeder of Morris Canal, in Pompton Plains, was 14.3 feet, at about 6 o'clock on the morning of October 10. As this gage is read only once daily it is probable that this reading does not represent the height of the flood crest. Evidence shows that it passed this point on the previous day. Records of the Newark water department show that the flood on Pequanac River began to rise at Macopin dam on October 8 at noon, and rose rapidly to the maximum of 6,000 cubic feet per second at 4 p. m. on October 10.

No records are available with reference to the rise of flood on Wanaque River.

Observations made on Pompton Plains on the morning of the 11th show that Pompton River was well within its banks at that time; therefore the Ramapo, Wanaque, and Pequanac must have discharged their flood waters some time previous to this hour....