The Parthenon By Way Of Papendrecht 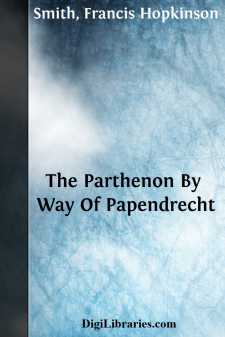 It was mine host of the Ferry Inn at Cook-ham who was calling, and at the top of his voice—and a big-chested voice it was—the sound leaping into crescendo as the object of his search remained hidden. Then he turned to me:

"He's somewheres 'round the boat house—you can't miss him—there's too much of him!"

"Are ye wantin' me, sor?" came another shout as I rounded the squat building stuffed with boats—literally so—bottom, top, and sides.

"I am, sor—and bloody sick of me job. Do ye see that wherry shovin' off—the one with the lady in a sweater? Yes—that's right—just slipped under the bridge. Well, sor, what d'ye think the bloke did for me? Look at it, sor!" (Here he held out his hand, in which lay a half-penny.) "And me a-washin' out 'is boat, feedin' of 'is dog, and keepin' an eye on 'is togs and 'is ladies—and then shoves off and 'ands me this—a 'a'penny, sor—a 'a'penny—from the likes o' 'im to the likes o' me! Damn 'im!"—and away went the coin into the river. "You'll excuse me, sor, but i couldn't choke it down. Is it a punt ye're lookin' for?"

The landlord was right—there was a good deal of him—six feet and an inch, I should think; straight as an oar, his bared arms swinging free; waist, thighs, and back tough as a saw-log. To this was added two big blue eyes set in a clean-shaven face bronzed by the sun, and a double row of teeth that would have shamed an ear of corn. I caught, too, the muscles of his chest rounding out his boating shirt, and particularly the muscles of the neck supporting the round head crowned with closely cropped hair—evidently a young Englishman of that great middle class which the nation depends upon in an emergency. My inspection also settled any question I might have had as to why he was "William," and never "Bill," to those about him.

The one thing lacking in his make-up—and which only came into view when he turned his head—was the upper part of one ear. This was clipped as close as a terrier's.

Again he repeated the question—with a deprecatory smile, as if he already regretted his outburst.

"Yes—and a man to pole it and look after me while I paint. I had old Norris for the past few years, but I hear he's gone back to gardening. Will you have time with your other work?"

"No,—you can do both,—Norris did. You can pole me out to where I want to work; bring me my lunch when you have yours, and come for me at night. You weren't here two years ago—were you?"

"No—I was with General French. Got this clip outside Kimberly—" and he touched his ear. "Been all my life on the river—Maidenhead and Bourne's End mostly—and so when my time was up I come home and the boss here put me on."

"A soldier! I thought so. I see now why you got mad. Wonder you didn't throw that chap into the river." I am a crank on the happiness one gets from the giving of tips—and a half-penny man is the rock bottom of meanness....