The Paper Moneys of Europe Their Moral and Economic Significance 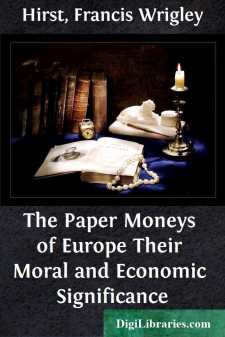 THEIR MORAL AND ECONOMIC SIGNIFICANCE

No more severe reflection could be passed upon the moral and political capacity of the human species than this: Five thousand years after the invention of writing, three thousand after the invention of money, and (nearly) five hundred since the invention of printing, governments all over the world are employing the third invention for the purpose of debasing the second; thereby robbing millions of innocent individuals of their property on a scale so extensive that previous public confiscations of private property through the adulteration of money—in ancient Rome, in Ireland under James the Second, in Prussia during the Seven Years' War, in the American colonies and the United States, in Portugal, in Greece, in various republics of Central and South America, even the assignats of the French Revolution—seem pigmy frauds in comparison with the present vast inundation of counterfeit paper money.

In these times, when so much attention is given to what I may call the prehistoric history of mankind, it would ill become me, a mere adventurer in anthropology, to discuss the origin of money or to attempt an explanation of the curious fact that the art of coining money was invented and perfected a thousand years before the art of printing. The coins struck by the best cities of ancient Greece are a model and a reproach to our modern mints; and being for the most part of good silver, they fulfilled the two main functions of currency—as a measure of value and a medium of exchange.

Silver was well adapted for the purposes of currency by its ductility, durability, divisibility, portability, and value. Its value depended on three things. In the first place, it was scarce; in the second, it was much in demand for the arts and manufactures; and in the third place, its intrinsic value was increased and stabilized by the needs and demands of the mints.

Gold had similar qualifications, but it was too scarce and too precious until the nineteenth century, in the course of which (for reasons which I need not enter upon here), most of the great commercial nations adopted a gold standard. Copper possessed in a less degree the qualifications of gold and silver, but it was the first metal to be coined into money in ancient Rome. The Roman as or pondo weighed a Roman pound of good copper, therefore possessed the two principal attributes of good money, a definite weight and a definite fineness. It was divided like our troy pound into twelve ounces of good copper.

The English Troyes or Troy pound was first used in the English mint in the time of Henry the Eighth. Edward the First's pound sterling was a Tower pound of silver of a definite fineness. Charlemagne's livre was a Troyes pound of silver of definite fineness. The old English Scotch pence or pennies contained originally a real pennyweight of silver, one twentieth of an ounce and one two hundred and fortieth of a pound. The famous pre-war English sovereign, now demonetized and misrepresented by the depreciated paper pound, was itself also a weight; but the twenty shillings and two hundred and forty pence which exchanged for it were token coins depending for their value upon the gold sovereign....