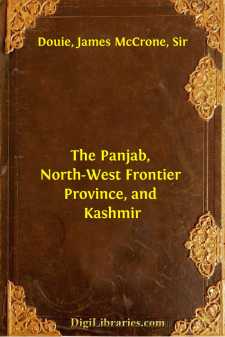 Add to My Favorites
Published: 10 years ago
Downloads: 80
Rating: (0 Votes)

Introductory.—Of the provinces of India the Panjáb must always have a peculiar interest for Englishmen. Invasions by land from the west have perforce been launched across its great plains. The English were the first invaders who, possessing sea power, were able to outflank the mountain ranges which guard the north and west of India. Hence the Panjáb was the last, and not the first, of their Indian conquests, and the courage and efficiency of the Sikh soldiery, even after the guiding hand of the old Mahárája RanjÃ­t Singh was withdrawn, made it also one of the hardest. The success of the early administration of the province, which a few years after annexation made it possible to use its resources in fighting men to help in the task of putting down the mutiny, has always been a matter of just pride, while the less familiar story of the conquests of peace in the first sixty years of British rule may well arouse similar feelings.

Scope of work.—A geography of the Panjáb will fitly embrace an account also of the North-West Frontier Province, which in 1901 was severed from it and formed into a separate administration, of the small area recently placed directly under the government of India on the transfer of the capital from Calcutta to Delhi, and of the native states in political dependence on the Panjáb Government. It will also be convenient to include KashmÃ­r and the tribal territory beyond the frontier of British India which is politically controlled from Pesháwar. The whole tract covers ten degrees of latitude and eleven of longitude. The furthest point of the KashmÃ­r frontier is in 37° 2' N., which is much the same as the latitude of Syracuse. In the south-east the Panjáb ends at 27° 4' N., corresponding roughly to the position of the southernmost of the Canary Islands. Lines drawn west from Pesháwar and Lahore would pass to the north of Beirut and Jerusalem respectively. Multán and Cairo are in the same latitude, and so are Delhi and Teneriffe. KashmÃ­r stretches eastwards to longitude 80° 3' and the westernmost part of WazÃ­ristán is in 69° 2' E.

Distribution of Area.—The area dealt with is roughly 253,000 square miles. This is but two-thirteenths of the area of the Indian Empire, and yet it is less by only 10,000 square miles than that of Austria-Hungary including Bosnia and Herzegovina. The area consists of:

Approximately 136,000 square miles may be classed as highlands and 117,000 as plains, and these may be distributed as follows over the above divisions:

On the north the highlands include the Himalayan and sub-Himalayan (Siwálik) tracts to the south and east of the Indus, and north of that river the Muztagh-Karakoram range and the bleak salt plateau beyond that range reaching almost up to the Kuenlun mountains....