The Outdoor Girls in the Saddle Or, The Girl Miner of Gold Run 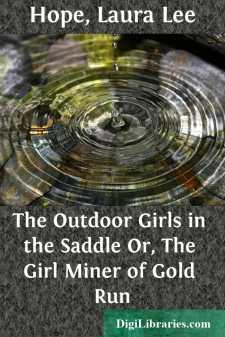 CHAPTER I A SUMMER IN THE SADDLE

"Hello, hello! Oh, what is the matter with central!"

The dark-haired, pink-cheeked girl at the telephone jiggled the receiver impatiently while a straight line of impatience marred her pretty mouth.

"At last! Is that you, Mollie Billette? I've been trying to get you for the last half hour. What's that? You've been home all morning twiddling your thumbs and wondering what to do with yourself? Of course! I knew it was central's fault all the time! Now listen! Goodness, what are you having over at your house? A jazz dance or something? I can hardly hear you speak for the noise."

"No, it isn't a dance," came back Mollie's voice wearily from the other end of the wire. "It's just the twins. They want to talk to you. Hold the wire a minute while I shut them in the other room."

Followed a silence during which Betty Nelson could distinctly hear the wails of Mollie's little brother and sister as they were ushered forcibly into an adjoining room. Then Mollie's voice again at the phone.

"Hello," she said. "Still there, Betty? Guess I can hear you a little better now. Mother's out, and I've been taking care of the twins. Just rescued the cat from being dumped head down in the flour barrel."

"Sounds natural," laughed the dark-haired, pink-cheeked one, as she visualized Mollie's little brother and sister, Dodo and Paul. They were twins, and always in trouble.

"Anything special you called up about?" asked Mollie's voice from the other end of the wire. "Want to go for a ride or something?"

"Not the kind of ride you mean," said the brown-eyed, pink-cheeked one, with a knowing little smile on her lips.

At the lilt in her voice Mollie, at her end of the wire, sat up and stared inquiringly into the black mouth of the telephone.

"Betty," she said hopefully, "you are hiding something from me. You have something up your sleeve."

"You're right and wrong," giggled Betty. "I'm hiding something from you, but I can't get it up my sleeve, it's too big!"

"Hurry up!" commanded Mollie in terrific accents. "Are you going to tell me what's on your mind, Betty Nelson?"

"When will you be around?" countered Betty.

"The best ever," and Betty rang off.

She twinkled at the telephone for a minute, then called another number.

The fair-haired, tall, and very graceful girl at the other end of the wire acknowledged that it was.

"Please suggest something interesting, Betty," she added plaintively, as she took a chocolate from the ever-present candy box and nibbled on it discontentedly. "I woke up with the most awful attack of the blues this morning."

"What, with a whole summer full of blessed idleness before you?" mocked Betty.

"Too much idleness," grumbled Grace. "That's the trouble."

Grace digested this remark for a moment, staring at the telephone in much the same manner as Mollie had done a few minutes before. Then she swallowed the last of her chocolate in such haste that it almost choked her....