The Outdoor Girls in Florida Or, Wintering in the Sunny South 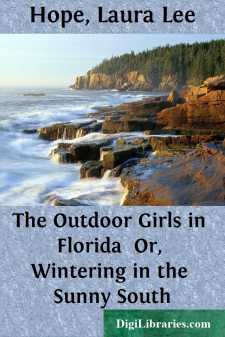 "Why, Grace, what in the world is the matter? You've been crying!"

Grace Ford tried to repress her emotion, but the cause of her tears was evidently too recent, or the effort at self-control too much for her, for she gave way to another outburst, sobbing this time on the shoulder of Betty Nelson, who patted her sympathetically, and murmured soothingly to her chum.

"But what is it, Grace?" Betty asked, after waiting a minute.

"I—I'll tell you in a moment or two, Betty. Just—just wait," and the tall, graceful girl made a more successful effort to master her feelings.

"Here come Amy and Mollie," went on Betty, as she glanced from the library window and saw two girls walking up the path opened across the lawn through the mass of newly fallen snow. "Do you want to meet them, Grace; or shall I say you don't feel well—have a headache? They'll understand. And perhaps in a little while——"

"No—no, Betty. It's sweet of you to want to help me; but Amy and Mollie might just as well know now as later. I'll be able to see them—in a little while. It—it's all so sudden."

"But what does it all mean, Grace? I can't understand. Is anyone dead—or—or hurt?" and Betty Nelson, who had called at the house of Grace to talk over plans for a dance they were going to attend the following week, looked anxiously at her chum. Only the day before Grace had seemed like her nearly-always jolly self. She and her three chums, including Betty, had been down town shopping, and Grace, as usual, had indulged in chocolates—her one failing, if such it can be called.

"Surely she can't be ill," thought Betty. "Ill from too many chocolates? I've seen her take twice as many as she did yesterday, and she doesn't look ill."

With this half-formed thought in her mind Betty looked more critically at her chum. Aside from the tears—which seldom add to a girl's beauty—there was no change in Grace Ford.

That is, no change except one caused by something rather mysterious, Betty thought—something that was hard for Grace to tell, but which had deeply affected her.

There came a ring at the door. Betty started toward it from the library, where she and Grace had gone when Grace let her chum in a short time before.

"Yes, do, please. I think Katy is with mamma. She took the news very much to heart. Let Amy and Mollie in, and then I'll tell you all about it. Oh, but I don't know what to do!"

"Now look here, Grace Ford!" exclaimed Betty briskly, pausing a moment on her way to the door. "You just stop this! If no one is dead, and no one is hurt, then it can't be so very dreadful. You just stop now, and when we all get together we'll help you in whatever trouble you have. You know that; don't you?"