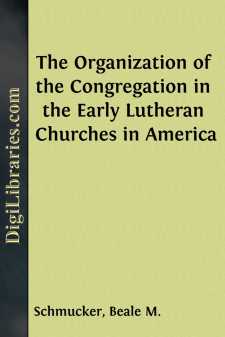 The Organization of the Congregation in the Early Lutheran Churches in America.

The Lutheran Church in this country has had an opportunity, as never before in its history, to determine for itself the whole form of its organization, uncontrolled by any external forces. In the old world the intimate and organic union of the church with the State left little liberty in this respect. When, therefore, the early Lutheran immigrants in this country were disposed to form themselves into congregations, to adopt regulations for their own government, to settle their relations to other Lutheran congregations, to determine the order of worship to be observed, they had to feel their way in the dark. No little time passed before all these matters became settled on a permanent basis. To follow them in their efforts to obtain a satisfactory organization of the congregation, is what I propose now to do.

There is grave reason to doubt whether, prior to the arrival in Pennsylvania of Henry Melchior Muehlenberg, any of the German Lutheran congregations in Pennsylvania had a well-developed, clearly defined, written constitution. I have carefully examined all the written records of nearly all the congregations which were in existence at that time, and have failed to find evidence of any such constitution. The first known written constitution of the church at Philadelphia was introduced in 1746 by Brunnholtz and Muehlenberg, and it was brief and rudimentary. The congregation at the Swamp, New Hanover, was the earliest German congregation in America, begun in 1703 by Justus Falckner, but whatever the form of organization which it may have received from him, or his immediate successor, no record of it is known to exist, and the first written constitution now known is in the hand-writing Muehlenberg. The Tulpehocken congregations were established by Palatinates from the Hudson and Mohawk, who came to Pennsylvania in 1723 and 1729. They were familiar with the congregational organizations in New York under Kocherthal and Falckner, which were formed under the counsel of Court Preacher Boehm, probably after the similitude of the Savoy Church in London, and under the influence of the long established Dutch Lutheran constitution in New York, based on that at Amsterdam. But no written constitution is now known in Tulpehocken earlier than that introduced by Muehlenberg. In all the old congregations the case is the same, so far as any known evidence proves.