The Oregon Trail: sketches of prairie and Rocky-Mountain life 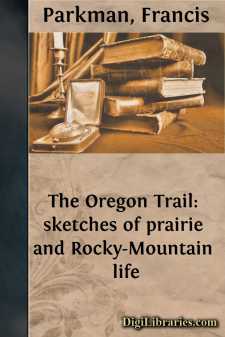 CHAPTER I THE FRONTIER

Last spring, 1846, was a busy season in the City of St. Louis. Not only were emigrants from every part of the country preparing for the journey to Oregon and California, but an unusual number of traders were making ready their wagons and outfits for Santa Fe. Many of the emigrants, especially of those bound for California, were persons of wealth and standing. The hotels were crowded, and the gunsmiths and saddlers were kept constantly at work in providing arms and equipments for the different parties of travelers. Almost every day steamboats were leaving the levee and passing up the Missouri, crowded with passengers on their way to the frontier.

In one of these, the Radnor, since snagged and lost, my friend and relative, Quincy A. Shaw, and myself, left St. Louis on the 28th of April, on a tour of curiosity and amusement to the Rocky Mountains. The boat was loaded until the water broke alternately over her guards. Her upper deck was covered with large weapons of a peculiar form, for the Santa Fe trade, and her hold was crammed with goods for the same destination. There were also the equipments and provisions of a party of Oregon emigrants, a band of mules and horses, piles of saddles and harness, and a multitude of nondescript articles, indispensable on the prairies. Almost hidden in this medley one might have seen a small French cart, of the sort very appropriately called a "mule-killer" beyond the frontiers, and not far distant a tent, together with a miscellaneous assortment of boxes and barrels. The whole equipage was far from prepossessing in its appearance; yet, such as it was, it was destined to a long and arduous journey, on which the persevering reader will accompany it.

The passengers on board the Radnor corresponded with her freight. In her cabin were Santa Fe traders, gamblers, speculators, and adventurers of various descriptions, and her steerage was crowded with Oregon emigrants, "mountain men," negroes, and a party of Kansas Indians, who had been on a visit to St. Louis.

Thus laden, the boat struggled upward for seven or eight days against the rapid current of the Missouri, grating upon snags, and hanging for two or three hours at a time upon sand-bars. We entered the mouth of the Missouri in a drizzling rain, but the weather soon became clear, and showed distinctly the broad and turbid river, with its eddies, its sand-bars, its ragged islands, and forest-covered shores. The Missouri is constantly changing its course; wearing away its banks on one side, while it forms new ones on the other. Its channel is shifting continually. Islands are formed, and then washed away; and while the old forests on one side are undermined and swept off, a young growth springs up from the new soil upon the other. With all these changes, the water is so charged with mud and sand that it is perfectly opaque, and in a few minutes deposits a sediment an inch thick in the bottom of a tumbler. The river was now high; but when we descended in the autumn it was fallen very low, and all the secrets of its treacherous shallows were exposed to view....