The Ordinance of Covenanting 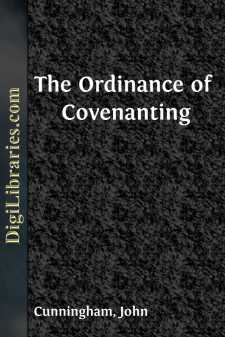 A covenant is a mutual voluntary compact between two parties on given terms or conditions. It may be made between superiors and inferiors, or between equals. The sentiment that a covenant can be made only between parties respectively independent of one another is inconsistent with the testimony of Scripture. Parties to covenants in a great variety of relative circumstances, are there introduced. There, covenant relations among men are represented as obtaining not merely between nation and nation, and between man and man, in some respects, each respectively, independent of the other, but also between master and servant, and between rulers and their subjects. There too is described an engagement between God, and Adam as the representative of the human race, which, to say the least, cannot without the most obvious perversion of language be represented as other than a covenant. It is alluded to in the words, "They, like men (or, Adam), have transgressed the covenant." And was it not in reality a covenant? There is revealed the Covenant of Redemption—that covenant which from the days of eternity was made between the Father and the Son, with the concurrence of the Holy Ghost, for the salvation of the elect. There too, that covenant is made known as established with men, that is, made with them or dispensed to them. Under this last aspect, it appears—"The Covenant of Grace." And there, are men encouraged to enter into covenant with God by taking hold of this covenant.

The conditions of a covenant, or the stipulation on the one hand, and the re-stipulation on the other, are the things promised in the covenant by the parties to one another. These may be mutual services, as is sometimes the case among men; or, obedience and good unmerited through God's favour bestowed, as in the case of man in innocence; or, obedience and sufferings, and a high reward for these exemplified in the Covenant of Redemption alone; or, the righteousness of Christ on the one hand, as in the last case, and free grace on the other, in the Covenant of Grace.

Sinners redeemed are in covenant with God. The term covenant designating their relation to him as a people is not figuratively applied to it. Were it so, there should be no ground for admitting the fact of any covenant even among men. True, the term is put to denote the ordinances of the material universe. But to maintain that it is in precisely the same manner used to denominate any mutual relation among moral beings, is to prefer an assumption manifestly gratuitous, and completely at variance with the obvious truth, that for a race interested in the blessings of the Covenant of Grace, these ordinances after the sin of man were continued. Though it was ordained that men should enter into covenant, the covenant is not like the laws of the lower creation, an absolute appointment taking effect without regard to the resolutions of men. As assuredly as the ordinances of the material heavens and the earth will be conducive to the accomplishment of the ends contemplated by infinite wisdom in their appointment, will the covenant with God entered into by those accepted of him be made to fulfil its design. But this it will be employed to do in the character of a sovereign arrangement suited not to unintelligent creation, but to the moral agent man. As far above the interference of man as is the government of the external universe, is that designated the covenant, as ordained. But adapted completely to him as a creature exercising volition, and in a state of responsibility, is every such relation in its essential character.

This relation is marked by features which distinguish it from a mere law. The expressions, to pass into, to enter into, employed in the one case, are totally inapplicable in the other. The covenant is often represented as forsaken both as a covenant and as a law; but is exhibited as gone into only as a covenant. Men are represented as joining themselves to the Lord in an everlasting covenant....