The Open Secret of Ireland 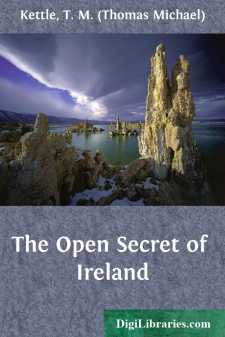 The object of Mr Kettle, in writing this book, is, I take it, to reveal to English readers what he not inaptly terms as "The Open Secret of Ireland," in order to bring about a better understanding between the two nations, and to smoothe the way to a just and final settlement of their old-time differences. Any work undertaken on such lines commends itself to a ready welcome and a careful study, and I feel sure that both await Mr Kettle's latest contribution to the literature of the Irish question. As the son of one of the founders of the Land League, and as, for some years, one of the most brilliant members of the Irish Party, and, later, Professor in the School of Economics in the new National University in Dublin, he has won his way to recognition as an eloquent exponent of Irish national ideas; whilst the novelty of his point of view, and the freshness, vigour, and pic turesque attractiveness of his style ensure for his work a cordial reception on its literary merits, apart from its political value.

Undoubtedly, one of the main sources of the Anglo-Irish difficulty has been mutual misunderstanding, generating mutual mistrust and hatred. But the root of the difficulty goes deeper. It is to be sought in the system of misgovernment and oppression which successive generations of British rulers have imposed upon what, with cruel irony, British historians and statesmen have been wont to call "the sister country." This is the real "open secret" of Ireland, a secret that all who run may read, and the effective bearing of which is: that tyranny begets hatred, and that freedom and justice are the only sure foundations of contentment and goodwill between nations.

During the past thirty years, and especially since 1886, when Mr Gladstone threw the weight of his unrivalled genius and influence into the scale in favour of justice to Ireland, a great deal has been done to erase the bitter memories of the past, and to enable the English and the Irish peoples to regard each other in the light of truth, and with a more just appreciation of what is essential to the establishment of genuine and lasting friendly relations between them.

But it would be idle to ignore the fact that, to a considerable section of the English people, Ireland is still a country of which they possess less knowledge than they do of the most insignificant and remote of the many islands over which the British flag floats. Mr Kettle's book ought to be of service in dispelling this ignorance, and in enabling Englishmen to view the Anglo-Irish question from the standpoint of an educated and friendly Irish opinion.

The output of purely political literature on the Irish problem has been increasing during the past few years, and there is room for a book which aims at focussing attention upon some aspects of it which the mere politician is apt to pass lightly over or to ignore altogether. Like most of Mr Kettle's work, the book bears the impress of his individuality, and, to many of his readers, this will constitute much of its charm and merit. At the same time, in order to prevent misunderstanding, it is necessary for me to state that I do not commit myself to acceptance or endorsement of everything which the book contains. I content myself with stating, from personal experience, that nothing which Mr Kettle writes about Ireland can fail to be worthy of notice by everyone interested in the Home Rule controversy, and that I believe the circulation of this volume will serve to stimulate thought about Ireland, and so to hasten the advent of that brighter day when the grant of full self-government to Ireland will reveal to England the open secret of making Ireland her friend and helpmate, the brightest jewel in her crown of Empire.