The One-Way Trail A story of the cattle country 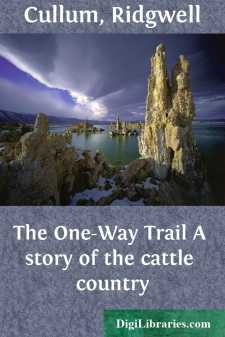 CHAPTER I A GENTLEMAN RANKER

Dan McLagan shifted his cigar, and his face lit with a grin of satisfaction.

“Seventy-five per cent, of calves,” he murmured, glancing out at the sunlit yards. “Say, it’s been an elegant round-up.” Then his enthusiasm rose and found expression. “It’s the finest, luckiest ranch in Montana––in the country. Guess I’d be within my rights if I said ‘in the world.’ I can’t say more.”

The quiet monosyllable brought the rancher down to earth. He looked round at his companion with an inquiring glance.

But Jim Thorpe had no further comment to offer.

The two were sitting in the foreman’s cabin, a small but roughly comfortable split-log hut, where elegance and tidiness had place only in the more delicate moments of its occupant’s retrospective imagination. Its furnishing belonged to the fashion of the prevailing industry, and had in its manufacture the utilitarian methods of the Western plains, rather than the more skilled workmanship of the furniture used in civilization. Thus, the bed was a stretcher supported on two packing-cases, the table had four solid legs that had once formed the sides of a third packing-case, while the cupboard, full of cattle medicines, was the reconstructed portions of a fourth packing-case.

The collected art on the walls consisted of two rareties. One was a torn print of a woman’s figure, classically indecent with regard to apparel; and the other was a fly-disfigured portrait of a sweet-faced old lady, whose refinement and dignity of expression suggested surroundings of a far more delicate nature than those in which she now found herself. Besides these, a brace of ivory-butted revolvers served to ornament the wall at the head of the bed. And a stack of five or six repeating rifles littered an adjacent corner.

It was a man’s abode, and the very simplicity of it, the lack of cheap ornamentation, the carelessness of self in it, suggested a great deal of the occupant’s character. Jim Thorpe cared as little for creature comforts as only a healthy-minded, healthy-bodied man, who has tasted of the best and passed the dish––or has had it snatched from him––will sometimes care. His thoughts were of the moment. He dared not look behind him; and ahead?––well, as yet, he had no desire to think too far ahead.

The ranch owner was sitting on the side of the stretcher, and Jim Thorpe, his foreman, stood leaning against the table. McLagan’s Irish face, his squat figure and powerful head were a combination suggesting tremendous energy and determination, rather than any great mental power, and in this he strongly contrasted with the refined, thoughtful face of his foreman.

But then, in almost every characteristic the Irishman differed from his employee. While Jim’s word was never questioned even by the veriest sceptic of the plains, McLagan was notoriously the greatest, most optimistic liar in the state of Montana. A reputation that required some niceness of proficiency to retain....